Forty-one teams, many of them dressed up, took part in the 2nd Annual Epic Car Scavenger Hunt on August 6, which was organized by Sioux Lookout Travel Information Centre staff.
Teams drove through town trying to complete as many scavenger hunt challenges as they could within a two hour period.
Finishing in first place and winning the prize of round trip tickets for anywhere Wasaya Airways flies, were brothers Dylan and Justis Husak.
Finishing second was the team of Samantha Olson and Sydney MacDonald.
Finishing third was the team of Breann Morgan and Jaimee Curtis.
Honourable mentions for going above and beyond went to Katie Gervasi and Savannah Kirton, Ashley and Joe Cassidy, and Emma McGill and Knowles McGill.
Proceeds from the event will be donated to the Sioux Lookout Lions Club for the 2020 Canada Day fireworks. 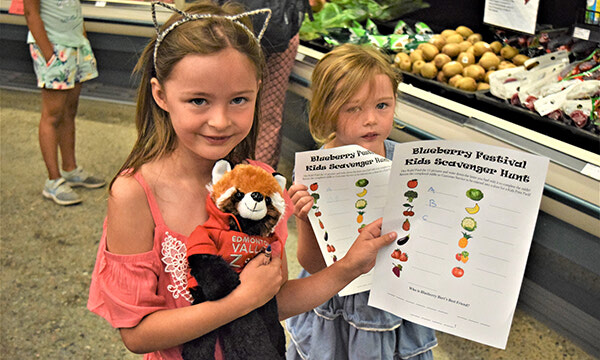 Smiling faces were common during a fun-filled Kids Day at Fresh Market Foods on August 6. Children participated in a store-wide scavenger hunt, ate cake, had their faces painted, and enjoyed a visit from Blueberry Bert!