The cafetorium was filled with laughter right from the opening lines as audience members followed a comedic story about a curling team in a rural Canadian town.

Their website describes the story, “The town is so small it only has one Tim Hortons. But community-minded Marlene is determined to “diversify” the curling club. She enlists four newcomers to learn the game but when she breaks her hip, it’s up to her politically incorrect ex-husband Stuart to step in. Things start off badly and get worse. Stuart doesn’t think the new Canadians can hack it and they have bigger worries than mastering this bizarre sport. With team unity on the rocks, time is running out. Will they be able to sweep aside their problems to compete in the Highland Cup? Hurry hard to the theatre to find out!”

“We’ve heard that it’s very relatable from a lot of the different communities, and you can always tell when there’s a lot of curlers in the audience,” said Kathryn Ball, Stage Manager and Company Manager for The New Canadian Curling Club production.

“It was really good. It was a really fun night, and I think the playwright really nailed it,” said Alyson Martin, Sioux-Hudson Entertainment Series chair.

Sioux Lookout was one of 24 performances throughout a month-long tour for the Royal Manitoba Theatre Centre, who said they enjoy performing in front of crowds in smaller communities.

“We left town on January 7 and we return home on February 7, so we’re out for a month and we do 24 performances,” said Ball.

“We always get comments on our surveys thanking us for bringing theatre to different towns. It’s one of the reasons why I love to do these tours, to get these kinds of reactions. We get great reactions to all our shows in Winnipeg but it’s often really special out here when this might be one of the only plays people see this year, so it’s really nice that way,” she added.

To see the lineup, ticket prices, or sponsorship opportunities, go to siouxhudsonentertainmentseries.ca. 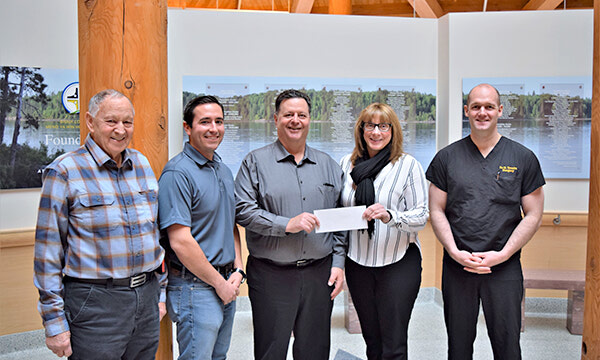 A donation of approximately $12,800 from Morgan Fuels to the Sioux Lookout Meno Ya Win Health Centre (SLMHC) Foundation has allowed SLMHC to purchase and order a new intubating bronchoscope for their surgical unit.