The Lake of the Woods Control Board (LWCB), who regulates the water levels of Lake of the Woods and Lac Seul, said a dry period dating back to January has resulted in lower-than-average water levels on Lac Seul.
“This spring we are seeing a really dry period continue, and that really started in January. In terms of the watershed area around Lac Seul, we’ve had only one week since the start of the year where we’ve had what’s considered normal precipitation. Every other week has shown a long-standing trend of dryer conditions, which is quite a reversal from the very wet conditions we had in September and October last year. A lot of that additional flow that was in the system last fall has now worked its way out of the system without the additional snow and rain in the winter and spring. We are definitely seeing dryer conditions, and that’s reflected pretty much anywhere you are in the watershed,” said Matthew DeWolfe, LWCB Executive Engineer.
“For what would be considered normal for Lac Seul, we’re right at the bottom of that range. Typically in the spring we see the lake reach its lowest point of the year in April… The lake has been very slowly refilling, but we’re about a foot below what would be considered the average in May,” he said.
DeWolfe recommends boaters stay alert and aware of the lower water levels, which could create an increase in hazards near the surface level.
“You definitely want to be observant that the hazards that are out there, whether that’s logs or rocks, may be closer to the surface then they typically are. The water levels are certainly lower than we typically see in July or August. They’re several feet lower,” he said.
In a community update on May 14, the Municipality of Sioux Lookout announced the preparation and opening of boat launches.
“We are pleased to advise that the process of preparing and opening Municipal Access Points (Boat Launches) is well underway. There were a number of factors leading to the later opening this season, including restrictions implemented by the Provincial Government in response to COVID-19, a late thaw, load restrictions on certain roads, low water levels and limited staffing,” the update shared.
The Municipality also clarified, “No person shall park a motor vehicle at a Municipal boat launch without a permit.”
The Municipality provided the following update on boat launches and boat launch passes on May 22, “Physical distancing requirements must be observed at all times, and there will be ABSOLUTELY NO FISHING from any of the Boat Launch docks.
“Boat Launch Passes will be available for sale from the Recreation Centre (specifically from the Memorial Arena), commencing on May 11th, as follows:
• Entry to the Recreation Centre will be through the garage door, located in the back lane of the arena.
• Upon entering, please proceed to the Penalty Box/ Time Keepers Box; the Boat Launch passes will be sold from here.
• Exiting from the Arena will be through the man door, located by the Olympia Room (signs will be posted)
• Physical distancing requirements will be observed in the Arena during the sale of Boat Launch passes.”
The Municipality further informed, “Boat Launch Passes will be sold from 3:00 p.m. to 5:00 p.m., May 27th, 28th, 29th, 2020.  Additional sale dates will be posted if demand necessitates. Please bring a cheque or exact amount of the pass you require. We will not be handing out change.
“2020 Boat Launch Passes’ Fees:
• Daily: $7.00
• Weekly: $25.00
• Season: $50.00” 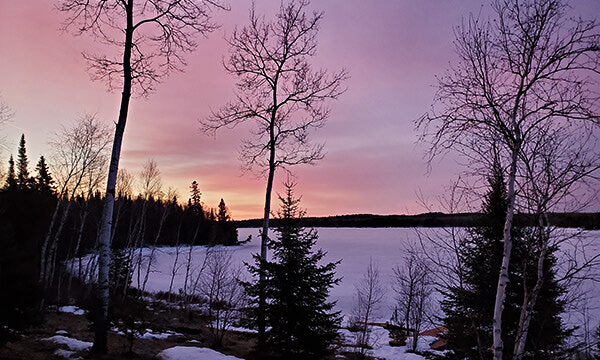 Sioux Lookout resident Dick MacKenzie has longed to see the spring season develop and come into bloom from his camp, located approximately seven miles outside of Sioux Lookout by boat or snowmobile.