Dr. Bill McCready, the physician who advocated for and worked to establish a satellite hemodialysis unit at the Sioux Lookout Meno Ya Win Health Centre (SLMHC), retired from his work as a clinician providing medical care, on August 1.

SLMHC President and CEO, Heather Lee shared, “Here at Sioux Lookout Meno Ya Win Health Centre, we want to deeply thank Dr. McCready for his work in bringing the satellite dialysis unit here to Sioux Lookout. We know having dialysis here makes it so much easier on the patients we serve in our region. Thank you to Dr. McCready and congratulations to him on his successful career and retirement.”

Originally from Northern Ireland, McCready moved from Toronto to work at Thunder Bay’s old McKellar Memorial Hospital in 1982, where he met with the inadequate availability of hemodialysis treatment units for Indigenous people. He noticed that the majority of Indigenous patients were forced to travel long distances, more than often requiring them to relocate to Thunder Bay for continued treatment. At the time, the unit at the old McKellar Hospital was the only dialysis unit in Northwestern Ontario.

McCready said that as kidney failure often comes without a whole lot of warning, and since hemodialysis centres were scarce at the time given their demand for specialized equipment and startup costs, that he saw this as a situation of concern in the north that needed attention.

McCready said that the standard procedure of hemodialysis is carried out three times a week, taking about four hours at a time. He explained the process of hemodialysis, “Briefly, what it does is it takes the patient’s blood, passes it through an artificial kidney, and then returns the treated blood to the patient, and it’s a reasonably, technically complicated procedure. It needs a lot of specialized equipment to do it.”

Inspired and determined to pin down a suitable community closer to home for Indigenous patients, and with the majority of his patients at the time being from SLHMC and its satellite nursing stations, McCready choose Sioux Lookout to build a hemodialysis unit. “Sioux Lookout seemed like a logical place to go, at least it was a little closer to home for people, and there was enough infrastructure that Indigenous people could get some support in that town,” said McCready. “The motivation was that the Indigenous people would do better with care close to home, and not being in the big city of Thunder Bay,” he added.

Former Thunder Bay Regional Health Sciences Centre’s (TBRHSC) Northwest Regional Renal Program (NWRRP) Manager, Mary Wrigley, who worked with Dr. McCready for several years and retired in March 2021, shared that he was a vital component of the nephrology care for both Sioux Lookout and Fort Frances.

Wrigley shared, “Dr. McCready was the medical director of the renal program at McKellar (hospital). Along with the manager of the program at the time, and the leadership of both McKellar Hospital and Meno Ya Win (former Sioux Lookout General Hospital site), plus the approval of the Ministry of Health, the plan for a satellite hemodialysis unit in Sioux Lookout was created. The nephrologist is always on call for the patient care needs of the patients in the satellite (nursing stations), and as well, they make monthly in-person visits to assess the patients and together with the nurses, develop patient care plans.”

McCready shared his admiration for his nursing colleagues in Sioux Lookout. He said, “There has been a very dedicated group of nurses that have been involved over the years in these dialysis units and really are engaged with their patients and look after them extremely well. The doctor does some important functions, but the real important function is done by the nurse. The nursing care model has been fantastic in Sioux Lookout.” McCready added, “We just came (from Thunder Bay) once a month to see the patients, and the other care was provided by local physicians.”

Wrigley shared, “Dr. McCready was a very patient focused physician. He was always looking to improve the patient’s quality of life. In that same context, he was behind the development of the inter-professional team. He felt that each profession brought a very valuable perspective to provide care. For example, he knew that if a patient did not have secure housing, his treatment plans would not mean much. He knew that often the social worker would be the most important person in the care plan.” She added, “He brought forward the concept of the renal clinic to ensure that individuals had time to learn and understand their disease and make decisions regarding their treatment options.”

With the purest of his intentions, McCready shared that even though he worked extensively to bring the hemodialysis facility to Sioux Lookout, he didn’t consult the people that he was doing it for, about his plan.

McCready said, “What I didn’t do and what I should have done, if I had a chance to do it over again, was I didn’t really consult Indigenous people about that. I was pretty naive in terms of, I noticed what was required and went ahead and did it. But, I wouldn’t do it that way now.” He added, “We got a little bit of push back when we first started that and we should have consulted them more about it. But the final outcome was met with great acceptance, and people thought it was a reasonable way of providing them complex care, a little closer to home.”

Wrigley shared that due to a high number of requirements to set up a hemodialysis unit, even today, not every hospital is equipped with one. She added, “There are many hemodialysis units in Ontario, however, not in all hospitals. Most of those hemodialysis units are within hospitals. The treatment requires specific water treatments, routine patient assessments including laboratory information as well as other aspects of care…being in proximity of a hospital, a good partnership.”

“In this same context, the idea of partnering with other hospitals to create satellites was another attempt to improve patient care and quality of life. Each of the satellite dialysis units employ nurses from the satellite site communities, but remain TBRHSC staff. In this way, he was sure that the standards of practice would be consistent across NWO (northwestern Ontario). Dr. McCready’s visions and commitment has brought many improvements to the care of people living with kidney disease throughout NWO (northwestern Ontario),” Wrigley shared.

Over the years, the field of hemodialysis has seen several advancements, shared McCready. He said that there were just eight nurses, mostly part-time, caring for about 12 patients when he started working in Thunder Bay, which has in recent times expanded to about 60 nurses and over 200 patients.

McCready also worked on a research project with Dr. Laurence Garred, which was conducted entirely in Thunder Bay as a partnership with Lakehead University. Their article ‘Urea Kinetic Modelling by Partial Dialysate Collection’ was published in the International Journal of Artificial Organs in 1989. McCready explained that their research helped transform how the effectiveness of hemodialysis is measured. “He (Dr. Laurence Garred) had the idea that if you measure the urea in the dialysis fluid that came out of the kidney, you’d be able to measure this in a different way than doing it from the blood. So, that’s what we did, we collected dialysis fluid, mixed it all up and measured the urea concentration. He did the math and we came up with a different way of assessing treatments,” he added.

After several years of work, which he greatly enjoyed, McCready said that he decided now was a good time to retire from part of his career, while he was still on top of what he did. McCready said, “I’ve really enjoyed all the stuff, the patient care, as well as the research, and teaching. I’m sort of pretty well involved with the medical school (Northern Ontario School of Medicine) since its inception as well. And I am not completely retiring from that side of things. I’m still going to be working for the medical school for a little while longer.” He added, “It’s bitter-sweet, and I’m of a certain age and it’s certainly time for me to bow out while I am still recently at the top of my game…so I think I am going at a good time.”

McCready hopes to see the local hemodialysis unit continue and thrive to offer care to the patients. With infection rates much lower at the two satellite dialysis units in Sioux Lookout and Fort Frances, as compared to other bigger units, McCready shared his pride in the operations that are carried out at these units.

McCready, who loves to garden and play golf with his friends during his free time, said that he would continue to live in Thunder Bay, sparing some personal time for himself, along with continuing work as the Senior Associate Dean in the Northern Ontario School of Medicine. 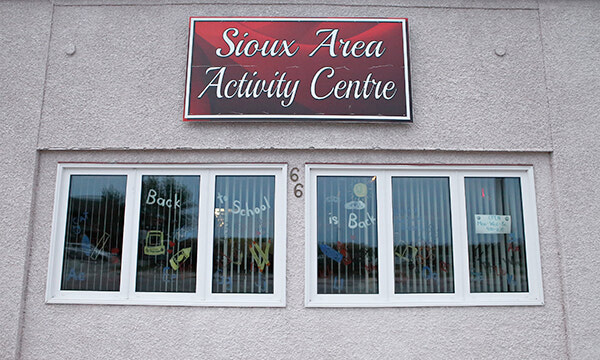 The arrival of September and the return of students to class inspired Sioux Area Senior Activity Centre members Charron Sippola and Joan Kydd to create a back to school themed display on the activity centre s window s last week...