The Canadian National (CN) Railway is a Canadian Class I freight railway, which serves Canada and the Midwestern and Southern United States. Doug Anderson, who loved working as a Track Maintenance Foreman with CN, decided to retire after serving the organization for over 42 years. “I’m going to miss my job and all the co-workers. Great bunch of guys,” he said.
Anderson started his career in 1978 and after having worked in several branches his last destination of work was at Savant Lake. His last day of work was on September 27. He celebrated his retirement on September 31.
Anderson will be enjoying his 12-weeks of leave, until the end of this year, which he had accumulated over time. He laughed, “The best thing was paydays, what can I say?”
“CN Rail has been so good to me over the years,” he added.
“I’m kind of having mixed feelings. This job has put bread and butter on my table for the last 42 years. I’m going to miss my job for sure. It’s not every day that you retire, but I don’t even know what I’m going to do on Monday. I have been telling my friends and family that I’d probably be waking up Monday morning wanting to go to work because that’s what I’ve been doing for all these years,” Anderson shared.
He said that he intended to retire at the age of 55, however continued until the age of 63. After having worked eight years more than his initial plan, Anderson had thought of continuing his work until the age of 65.  However, he said, “I figured, maybe I’m just going to do some stuff around, and live the life for a while instead of just working.” 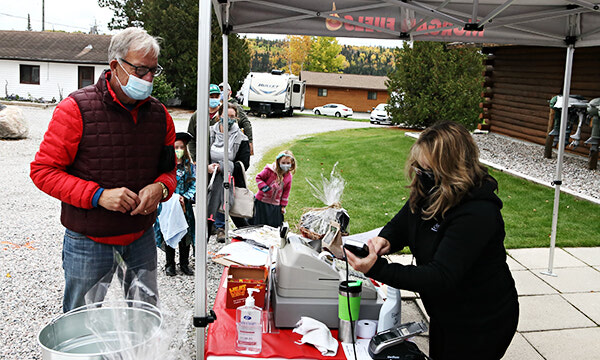 Anderson s Lodge invited the community to their Fall Market on Oct. 3 to find out about new services they will be offering, enjoy a shore lunch or signature pulled pork sandwich, or perhaps to play a game of horseshoes, darts, or corn hole.