The following is the tenth installment in a series about Nan Dorland, a radio star from New York City who spent six years on what is now Winoga Island on Abram Lake during the 1940s. Nan later struggled to become a writer and a prospector in northern Saskatchewan. Follow at www.nandorland.blogsot.com or on Instagram @discoveringnan.

Nan’s husband Richard Morenus figures prominently in her first article for Maclean’s entitled “Jim Chief,” published on October 15, 1946. There is no mention of Richard in her second article for Maclean’s published the following year. By that time their marriage was over.
Nan’s second Maclean’s article “The Woman’s Bushed!” published on August 15, 1947 likely started as diary entries that were rewritten and then submitted to the magazine in a hurry. Nan’s circumstances were not great. Her marriage to Richard was over and she was (perhaps) alone in Sioux Lookout. She needed the money.
This article is another example of Nan’s evocative writing skills. It provides an account of her canoe expedition north of Sioux Lookout with a bushman-prospector named Joe in search of “a rich vein of high grade.”
The trek involved 240 kilometres (150 miles) of rapids and at least 20 portages. When Nan asked Joe, a man she said she had known for years, if she could join him on the trip, he exclaimed, “The woman’s bushed! A week out of the hospital where she was lyin’ for months an’ already she wants to go chippin’ rocks.”
After a long illness in hospital, Nan saw this journey as a “celebration at being alive and back in the bush once more.” After a month of convalescing (“It took me all that time to get my legs moving one before the other again”), Nan and Joe shoved off from the lodge on Abram Lake. It was a hot July day. “The memory of the months of fever, pain and the smothering confinement of sickness would be swallowed up in the stringent demands of the bush. I was coming to life again.”
Nan’s account reveals her strong descriptive writing skills. For example, here’s her description of running some rapids in a canoe:
“You have felt yourself slipping in the bathtub. That satiny slide beneath your feet. That flying contorted feeling in your limbs as you grip desperately at nothingness. It lasts for only a moment. Our rapids lasted much longer but the bathtub sensation endured. … A broad flat rock just beneath the surface. No time, no room to avoid it. Over it we slid. I felt the canoe’s agonized groan, felt the vibration as the flooring grated and the ribs contracted inward. There is that sickening pity for tortured live things. I felt it now for the canoe . . . that bush possession above all others that endears itself like a personality, a brave and eager partner.”
One interesting observation Nan and Joe make during their trek was that northern Ontario was becoming the “land of the vanishing portage.” Several times as they travelled through the bush country, they discovered that the places where portages were clearly indicated on their map were overgrown and unrecognizable. Much time was lost scouting the shoreline on foot looking for a usable trail, often uncleared and choked with windfall. “Nowadays most fellows go in by plane,” Joe says. “Looks like no one wants the hard work anymore.”
Nan and Joe never did find the rumoured high-grade vein. As they left behind the final and 27th portage of their trip and headed back to Abram Lake, Nan writes that it was somehow a letdown. “A world had closed behind us.” She had “caught a severe case of prospecting fever” and wanted someday to return, “come hell, higher water or more beavers.”
Nan was good to her word, although it wouldn’t be Ontario that she returned to. She had heard about uranium discoveries in northern Saskatchewan, and within two years she was back prospecting – and writing – this time with trapper and prospector John Albrecht by her side. 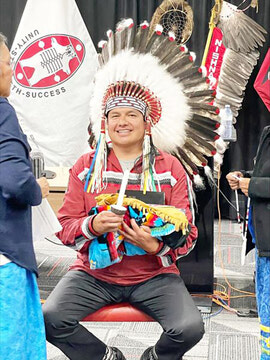