The following is the seventh installment in a series about Nan Dorland, a radio star from New York City who spent six years on what is now Winoga Island on Abram Lake during the 1940s. Nan later struggled to become a writer and a prospector in northern Saskatchewan. Follow at www.nandorland.blogsot.com or on Instagram @discoveringnan.

The Exhilaration of Dogsledding

For a couple from New York accustomed to getting around by streetcars, elevated trains, buses, and subways, the northern Ontario wilderness presented unique transportation challenges. When Nan and Richard Morenus first arrived at their island in May of 1941, everything they needed had to be transported from Sioux Lookout across 22 kilometres (14 miles) of water by canoe. Then winter arrived.

“We had overlooked nothing,” Richard writes in “Dogs on Ice” for Maclean’s magazine (Sept. 15, 1948), “except the very simple fact that our canoe and motor would be of no further use, and that for the seven months of winter stretching ahead we had not taken into consideration the basic problem of transportation.”

Travelling to Sioux Lookout on snowshoes was “a nightmare,” Richard continues. They needed to get some dogs. They put out the word to a few trappers and fur traders, built some doghouses, and eventually ordered by mail, sight unseen, a team of dogs.

“Nan was ecstatic when we first saw our dogs in town,” exclaims Richard. “They were massive-shouldered, burly, beautiful brutes.” There were only three in the team, part dog and part wolf. Nan and Richard worked feverishly in front of an amused audience of Ojibway to assemble the harness and fasten the dogs to their toboggan in the cold. Then Richard, who had no knowledge of dogsled teams other than what he had read in books, yelled “Mush!” and was promptly knocked flat.

“I had a quick glimpse of Nan making a flying leap for the toboggan as it flew past. Somehow she held on,” Richard recounts. “I got to my feet and watched them as they became a bobbing black dash against the snow until they disappeared over a crest. Then the Indians laughed.”

Richard had to walk back to the cabin through knee-deep snow, following the team’s trail. When he finally arrived, Nan had the three dogs chained up at the doghouses. “How did you do it?” he asked. “It was wonderful,” she said. “Remember the week we spent on a farm? I tried that ‘gee,’ ‘haw,’ and ‘whoa’ business the farmer used on his horses —and it worked. I’ve never had such a thrilling ride in my life!”

Richard wrote in Crazy White Man (1952) that, while he had always loved dogs, he struggled with the sled dogs. “They looked like dogs, but there the similarity ended,” he writes. “I tried to make friends with them, but upon my approach their hackles bristled stiffly, and they regarded me with that blinkless stare of their slanted topaz eyes. ... The look I got from all of them was pure unadulterated cussedness.” Richard was afraid of, and distrusted, the dogs. He decided that the only way to master the wolf strain in the dogs was to beat them. “The subsequent unmerciful beatings I had to administer to these animals were done with both eyes on the wolf,” Richard explains. “The dogs resigned eventually, and quite docilely after a few ministrations from an ax handle, to my harnessing them.” He later told his book tour audiences that the beatings got to be sort of a ritual that the dogs expected. “On days when he didn’t work the team,” one newspaper wrote, “Morenus said he would beat the dogs anyway, just to show that he still loved them.”

Nan loved the dogs and mastered dogsledding right away. Mushing dogs was a skill she took with her when she moved to go prospecting in northern Saskatchewan. 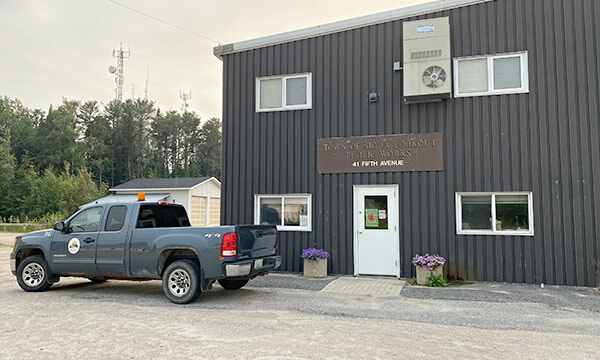 The Municipality of Sioux Lookout is sharing an early reminder for people to mark September 18 on their calendars as the Municipal Hazardous or Special Waste Collection Day...