The following is the fifth installment in a series about Nan Dorland, a radio star from New York City who spent six years on what is now Winoga Island on Abram Lake during the 1940s. Nan later struggled to become a writer and a prospector in northern Saskatchewan. Follow at www.nandorland.blogsot.com or on Instagram @discoveringnan.

The Big Move to Sioux Lookout

It took Nan and Richard and their little cocker spaniel Nik five days to travel from New York City to Sioux Lookout, Ontario via Chicago - across New Jersey, Pennsylvania, Ohio, and Indiana. They left their Manhattan home on May 1, 1941, and, according to a letter to Nan’s father from Canada’s Department of Citizenship and Immigration, were granted permanent entry into Canada at the Pigeon River border crossing on May 4.

Richard later wrote in his book Crazy White Man (1952) that passing through Canada Customs “was surprisingly less complicated than when I had been a mere tourist.” He and Nan explained “rather proudly” that they were landowners and had come to stay. Their possessions were inspected and they were admitted and welcomed into Canada with all the privileges of a Canadian citizen except the right to vote. The Morenuses maintained their American citizenship.

Here is Richard’s description from his book of the 410 kilometre trip from the US border to Sioux Lookout:

“After passing the border … the tires of the car were on the most intolerable highway I had ever driven. It was carved through rock and flanked on both side by virgin timber. … The road northward got progressively worse. The car bounced, squeaked, chattered, and groaned in protest. There had been no pavement since crossing into Canada more than two hundred miles behind, and the frost, several feet deep through the winter, was just coming out, heaving big chunks of the road’s surface as it left the ground. Also, the farther we went, the colder it became. ... But a thousand miles to the north, where I was, winter was hanging on with remnants of snowdrifts along the roadside and lakes held captive under slush ice.”

Nan and Richard arrived in Sioux Lookout at lunchtime on May 5, 1941. Their first stop was the Hollywood Cafe owned by Tom and Ken Lee where they ate lunch “under the questioning gaze of Indians and bushmen,” Richard writes in his September 1, 1946 article for Maclean’s magazine, “From Broadway to Bush.” The license plate on their car was a tip-off. “We were obviously ‘those crazy Americans’ who had bought the island and were moving here to live.”

The Morenuses soon learned that everyone within a 100-mile radius knew about their land transaction, to the minutest detail. “That’s something you’ll have to get used to,” Ken Lee is quoted as saying in Crazy White Man. “You’re something of a curiosity. It isn’t every day that an American, especially a New Yorker, comes to the bush to live.”

Fifteen-year-old Bill Wilson (brother of Dorothy Maskerine) took the Morenuses and all their gear over to the island in a square-stern canoe fitted with a motor.

Ten days after their arrival on their island, Nan and Richard were getting settled in. “We are slowly becoming acclimatized, and although the work is hard, and there is plenty of it, it is already having its good results,” Richard wrote to his former NBC boss on May 25. “Nan is settling down as the excitement of travel leaves, and the even tenor of daily existence goes on.” 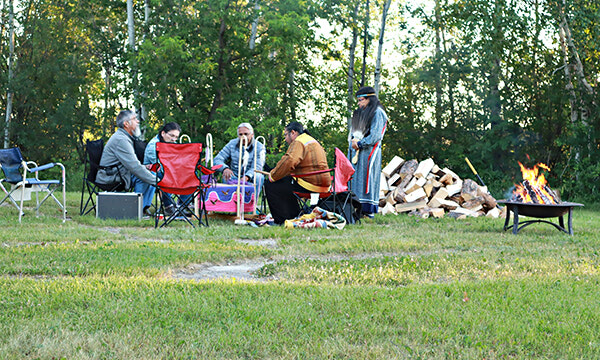 July 1 A Day of Healing in Sioux Lookout

The morning of July 1 began with a sunrise ceremony in Sioux Lookout, followed by a day-long gathering as part of A Day of Healing...