The following is the sixteenth installment in a series about Nan Dorland, a radio star from New York City who spent six years on what is now Winoga Island on Abram Lake during the 1940s. Nan later struggled to become a writer and a prospector in northern Saskatchewan. Follow at www.nandorland.blogsot.com or on Instagram @discoveringnan.

Nan and John: A Marriage, a Baby, a Death

In March of 1950, Nan Dorland and John Albrecht left their cabin on Selwyn Lake, Saskatchewan, passing through Prince Albert on their way to Toronto. Nan was four months pregnant. She was 38 years old.

John later told his friend Bob Lee that they wanted the best doctors for Nan due to the many operations she had had for ulcers, so they went to Toronto for the birth of their child.

Nan and John got married in Toronto on April 29, 1950, their wedding officiated by Rev. J. Norrie Anderson, a United Church minister. The witnesses were the minister’s wife Isobel C. Anderson, and LeRoy A. Tobey, John’s former prospecting partner with whom he had made the Nisto uranium discovery.

In the months leading up to the birth of their son, John and Nan stayed at Musselman’s Lake, located about 6 kilometres northwest of Stouffville. It is now part of the Greater Toronto area. In the mid-1900s, Musselman’s Lake was considered to be the entertainment capital of southern Ontario.

Nan Dorland passed away in Women’s College Hospital at Toronto on September 3, 1950 from complications of childbirth. Dr. John Button, the same doctor who had delivered her son, signed her death certificate.

Specifically, Nan died of strangulation of the bowel because of obstruction due to adhesions from her previous abdominal surgeries. Nan had had two surgeries (that I know of) for a perforated bowel, once in New York City in 1939, and one at Sioux Lookout in 1947. “Bowel obstruction may occur during the fourth or fifth months of pregnancy when the uterus rises into the abdomen but most often occurs in the third trimester or postpartum,” explains Diane J. Angelini in the Journal of Midwifery & Women’s Health (2004). “When an obstruction occurs, there is significant risk for severe morbidity or mortality for both mother and fetus, and treatment needs to occur as soon as possible. ... Fluid and electrolyte losses can be significant, leading to hypovolemia, renal problems, shock, and death.”

After their son was taken to California to live with Nan’s parents, John brought her ashes to their home in northern Saskatchewan. Bob Lee wrote this touching description of Nan’s final resting place in his unpublished manuscript, The North Called Softly (1977):

“There is a sand esker on Selwyn Lake that was very beautiful, This was their favorite spot and was situated close to their cabin. Here they had spent many evenings together, watching the moon rise slowly over the vastness of the lake, listening to the soft breeze of evening playing among the pines, and here the loon would always call from the bay. And the beautiful life they had shared here at this very spot John had enjoyed the happiest time of his life. It was only fitting that here they should part ... forever. Some years ago I saw a self-timed photo of John standing behind a stone cross laid out on the sand at this beautiful spot - on which he had moments before scattered the cremated remains of his beloved wife. Pain and anguish clearly showed on his face.”

“But John survived that terrible agony and did smile again,” Lee continues. “Although he had to force himself to walk the bush prospecting for years afterwards.” 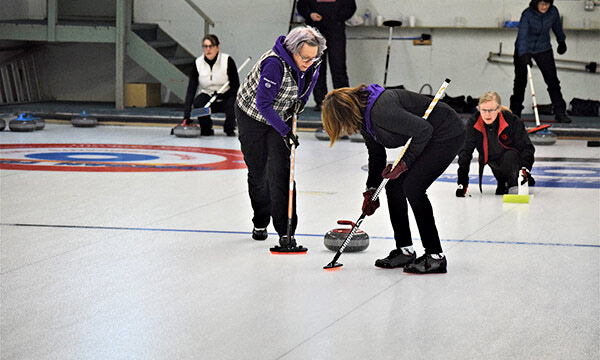 The Skip to Equip Classic is back, marking its 10th Anniversary and 10 years of fundraising for the Sioux Lookout Meno Ya Win Health Centre...