The following is the thirteenth installment in a series about Nan Dorland, a radio star from New York City who spent six years on what is now Winoga Island on Abram Lake during the 1940s. Nan later struggled to become a writer and a prospector in northern Saskatchewan. Follow at www.nandorland.blogsot.com or on Instagram @discoveringnan.

Nan’s second husband John Erdmann Albrecht was born in East Prussia on December 7, 1898 and raised on the Baltic Sea where his father, a Prussian civil servant, was in charge of a lighthouse on the northeastern end of the Curonian Spit. “There between the Memel River and the long narrow sandspit, with the Baltic Sea to the west and the Curonian Lagoon to the east, John spent his youth in an unspoiled environment of unmatched beauty,” writes Dr. Klaus Lehnert-Thiel. “Fishing, hunting, trapping, skating, and sailing were activities the young John Albrecht enjoyed from a very young age.”

John’s family lived in or near the town of Memel (now Klaipeda). His father Johann Albrecht commuted between their residence and the lighthouse. To facilitate travel during the winter, Johann invented a sailing boat on skids. “In doing so,” Lehnert-Thiel writes, “he became the forerunner and acknowledged inventor of a new sport which 50 years later became widely accepted.”

In August 1914, just weeks before the outbreak of the First World War, Russia invaded East Prussia, forcing thousands, including the Albrecht family, to flee. The Germans fought back, and by the end of the Battle of Tannenberg (August 27-September 13) over 90,000 were captured and 70,000 were killed or wounded - a devastating defeat for Russia. “I remember John telling me that [he] and his family were living in a refugee camp with nothing to do,” Dr. Lehnert-Thiel told me. “As a bored 16-year-old he volunteered to serve in the [German] army.”

As a teenager, John saw continuous front-line action as a machine-gunner in the Schwarze Division (“Black Berets”) for over two years. He was captured by the British on June 7, 1917 at the Battle of Messines at Flanders, Belgium near Ypres.

John spent two and a half years in a British prisoner-of-war camp. Prison, while not a happy place to be, must nevertheless have been an immense relief for him after the extreme violence and danger he had experienced on the battlefield. He later told interviewer Berry Richards (1975) that he met a Canadian of Scottish descent while in the POW camp. John learned about Canada from their conversations. “Why stay in Germany?” the Canadian apparently asked John. “Get into Canada.”

German prisoners were repatriated by the British in the spring of 1920. After his release, John returned to his home in Memel which had by then been placed under the protection of France under the Treaty of Versailles. His plan, according to Lehnert-Thiel, was to look after farm property owned or managed by his father.

In 1923, the Treaty of Versailles was broken when Lithuania revolted against French occupation. An ethnic struggle ensued when most people in Memel region opted to emigrate to Germany rather than stay under Lithuanian rule. (Less than 600 of 150,000 opted for Lithuania.).

“Either the heavy-handed Lithuanian administration or John’s nationalistic feelings made it difficult for him to remain in his home country,” Lehnert-Thiel explains, “and precipitated his emigration to Canada in 1929.” He applied in 1925 and by 1929 he had his visa and passport.

On April 24, 1929, 30-year-old John waved goodbye to his sisters and brother on the pier at the Port of Danzig (now Gdansk, Poland) and sailed for Canada on the Baltic America Line’s ship named SS Polonia. He arrived at Halifax, Nova Scotia on May 5 and took the Canadian National Railway west to Regina, Saskatchewan. It was not long before he headed north where he spent the next four decades as a trapper and prospector. 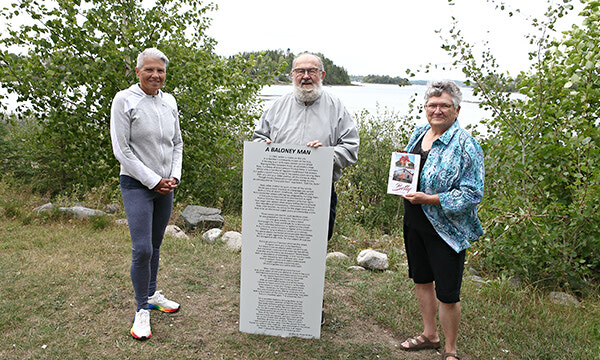 Author Elaine M Barr, a former Sioux Lookout resident and police officer for 12 years, returned to Sioux Lookout on August 27 as part of the Northern Ontario book signing tour for her newest book, Blame It On Betty....