The Keewatin-Patricia District School Board (KPDSB) will spend up to a million dollars to demolish the majority of its Queen Elizabeth District High School (QEDHS) building.
KPDSB Director of Education Sean Monteith said the school board will be retaining part of the building that still has a lot of functionality for its use and that of its partners, Seven Generations Education Institute and Nishnawbe Aski Nation (NAN).
“We have a fairly clear plan as to what Seven Generations is looking for, to run their alternative learning, their post-secondary type programming… We also would look at the part of the building that we would still retain for our own use, because we have an adult education partnership program with Seven Generations, so we would probably use that and we have an alternative learning program at Sioux North that we would run out of the existing QE,” Monteith shared.
KPDSB would continue to own the building and lease space within it.
Speaking to what programming NAN might wish to run in the building, Monteith said, “All I can say is that it would seem that they’re looking at running kind of an alternative learning opportunity for more secondary aged students coming from the NAN communities.”
Asked what might happen once demolition at the QEDHS site is complete, Monteith commented, “Probably looking to dispose of the property that the part of the building that we demolish is on.”
He said the school board hopes to complete the demolition by the end of 2019.
The KPDSB will also be partnering with NAN and Ka-Na-Chi-Hih Solvent Abuse Treatment Centre at the school board’s 70 Wellington Street site.
“The Ka-Na-Chi-Hih Solvent Abuse Treatment program would be run by that organization out of the Wellington site after they make some capital improvements to that building. Then the plan would be for a six to eight bedroom residential solvent treatment facility for youth from the north.” Monteith said.
The KPDSB will continue to own the building.
“We would be providing probably the academic education component at the site for the kids as they are there for treatment and healing,” he added.
“My understanding is they would like to be into that building by the end of this year as well,” he said.
Commenting further on the board’s educational facilities in Sioux Lookout, Monteith said, “Of course the big story for us in Sioux Lookout this year was the overall completion of the Sioux North High School capital project.”
He said wrap up work would be taking place at the new state of the art high school over the course of the summer. Students and staff moved into the building this spring.
Monteith went on to comment, “I think, in fairness to Sioux Mountain Public School in Sioux Lookout, it kind of gets overshadowed by Sioux North because it keeps plugging along doing great, amazing things with kids. We opened our child care, early learning site. We have several kindergarten classes. We have great programs at Sioux Mountain. Now that Sioux North and Sioux Mountain are together, we have a preschool to post-secondary campus that we have built. We’re proud of that and I think that’s certainly a highlight.”
He concluded, “In the last year, we’ve had two of the trustees for the Keewatin-Patricia District School Board come from the Sioux Lookout area. We have Darrin Head and Eric Bortlis, both of whom come from the education sector and they have been tremendous assets to the board. The community, and the students’ families, and First Nations in the Sioux Lookout area are admirably represented at the Keewatin-Patricia District School Board level by those trustees and the voices of the young people and their families of Sioux Lookout are certainly very well communicated and well expressed. “ 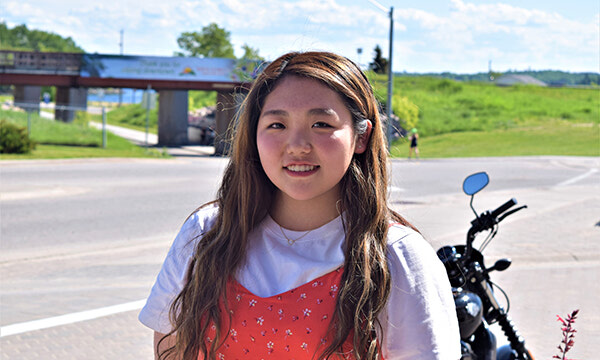 Akane Terao, who is wrapping up her grade 11 year at Sioux North High School, has been in Sioux Lookout for the past eleven months on a long-term Rotary Youth Exchange.