The Digital Creator North program, which is hosted in the digital media room at the Sioux Lookout Public Library, is continuing with the addition of new program lead Sarah Fraser.

Fraser, who is an Animation and Graphics Technology graduate and former animator within the gaming department for the Department of National Defence, shared that she’s excited for this opportunity.

“It is so wonderful to be given the chance to make a difference in the lives of our youth by making fun art! Like the rest of the Digital Creator North team, I too envision a thriving media arts community in Northern Ontario,” she said.

The Digital Creator North program is described as, “A drop-in, out-of-school learning environments for youth to develop skills in digital media using a participatory culture model and are staffed by full time art mentors. This project is aimed to have a positive cultural impact on Northern Ontario by increasing participation in the media arts sector in six small to mid-sized communities. The Digital Creator sites are located in the following partnering communities — New Liskeard, Timmins, Elliot Lake, Sault Ste. Marie, Kenora and Sioux Lookout.”

The program initially launched in February of 2017 in Sioux Lookout, and it’s been achieving success since. Chief Librarian Mike Laverty shared that it has become a big part of reaching teens and young adults.

“It became a huge part of our young-adult programming. There’s around six or seven kids who are the core of the program, and they kept coming back and asking if it was on. Now those kids are back, so it’s fun,” he said.

“In Sioux Lookout I think we have a lot of creative young people, and they don’t necessarily have all the tools or guidance to make things happen, so that’s the beauty of the project… The project, ideally, is the kids have their own idea and Sarah is sort of the creative director and helps them make that happen,” he continued.

“Out of all the six communities that have Digital Creator happening we are the busiest. We are the most thriving. That has something to do with the fact that we have a smaller town with less to do, but it’s bringing together artists and getting out creativity that people never knew they had. It’s developing the next generation of inspiration and letting them know that they can inspire the world with the technology we have available,” explained Fraser.

Moving forward, Fraser shared that she has exciting visions for the program, but it’s important to hear from regular participants as well.

“I have a couple pages of awesome ideas but, mainly, I want to ask the youth what they want do to and guide that,” she concluded.

To stay up to date on Digital Creator North in Sioux Lookout, check out their Facebook page @DigitalCreatorSLKT. 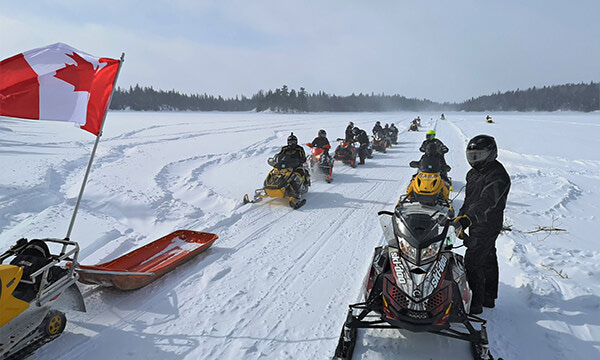 Twenty-five riders took part in a free Family Ride put on by the Ojibway Power Toboggan Association on March 3.