Saturday night my Facebook chat box popped open with a hello from Cousin Lee down in Michigan. What a thrill! We have been lifelong friends of the first order, tough MacKenzie boys whenever we got together.
We drifted apart and lost touch with each other about 10 years ago.
The last time I saw Lee was at his house in Michigan when I stopped in as I was on a road trip that passed close to him. “I have some Gold Tassel and some Canadian Club in the cupboard, and cold beer in the fridge. What can I get for you?” he asked right away.
It was a classic beginning to a good visit, reminding me of past visits at his home in the country. We could sit for hours on a fine fall afternoon out in the yard with a case of beer and a shotgun as we talked and laughed and got caught up on our lives since we were together last. Whoever opened a fresh beer got to fling the cap as far as he could throw it while the other tried to blast it out of the sky with the 12 gauge.
We’re tough hombres, so imagine my surprise as Lee and I chatted Saturday night and suddenly he messaged, “Sometime if you’re down this way, let’s get yogurt.”
I was shocked… SHOCKED! I can see my cousin converting to Jehovah’s Witness, even Baptist (highly unlikely, but… possible), but turning into a yogurt eater? I figure he’d be more likely to join the Democratic Party.
I sat stunned, wondering what to say. The last time down he took me to the Sportsmen’s Bar where we sat around in a roomful of antlers drinking tap beer, house whiskey, and eating pickled eggs from a great huge glass jar with a mouth so big you could stick your whole arm in and pluck out your own clucker from the brine. As the afternoon highlight, one of the locals pulled a chunk of homemade venison jerky from his shirt pocket, chawed off a big hunk using only his teeth and both hands, then passed the remainder around where all the guys took turns biting off their own hunks of jerky from the steadily diminishing stump of deer meat.
Now, he’s proposing to take me to a yogurt bar? I have no idea what that’ll be like. I picture a little sidewalk sign with fancy calligraphy in front of a small gingerbread house with doily curtains touting the daily special of pineapple yogurt and raspberry gelato
As I sat silent, wondering what to say, wondering if some sort of tragedy had closed in on Cousin Lee, he messaged again.
“Let’s get tougher.”
I wanted to jump on that, but had no idea what he meant. When we were boys his father had an old car axle out in the yard, with wheel hubs still attached at each end. Lee and I would challenge each other to lift the whole works up over our heads. It was heavy. Real heavy. But, after extensive grunting, swearing, wobbling and staggering around the yard we could do it, just in time to yell, “Get out of the way” as we simultaneously let go and jumped clear while the hillbilly barbells crashed down, burying the hubs four inches deep into the hard packed earth. We were already tough.
As I sat speechless, dazed, puzzled and sad, yet another message sprinted in. “Let’s get together.
Damn spellcheck.”
What kind of algorithm turns “together” into “yogurt?” 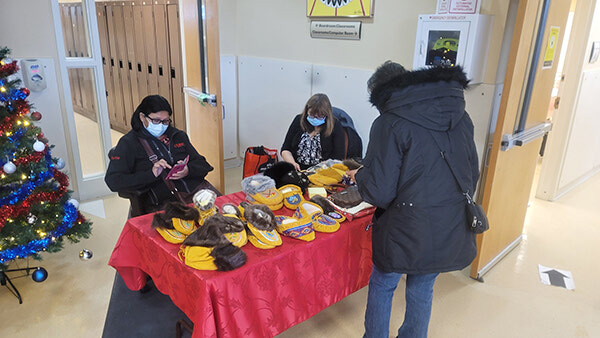 A variety of items, including handcrafted items and baked goods, were available for purchase at the Sioux Lookout Area Aboriginal Management Board s Arts and Crafts and Bake Sale on Nov. 19...