Here’s a picture of my makeshift scarecrow at camp. I really am trying to make friends with my raven neighbors, but it’s hard sometimes.
For the past few weeks a nearby raven has squawked incessantly from daybreak to nightfall. It has caused me to reconsider my neighborly efforts.
Yesterday morning a raven was perched atop my woodpile 20 feet from the palace and I was thrilled when I stood and talked with him and he sat, listening politely. He seemed to agree that the morning was pretty fine and I think he was considering my offer of a cigar and a glass of wine in the afternoon.
About then Wojo headed to the woodpile, to offer greetings, no doubt. At that the raven sprang straight into the air and immediately plummeted, face first, smack into the ground.
Deja vu. I think that is the same dunce I had on the deck a month ago. He must have fallen from the nest and conked his bean.
For the next hour I watched him pogoing around the yard screaming out that wretched noise we’ve been inundated with for the past weekends.
Every few minutes one of the adults flew in fast and low, dive bombed the obnoxious critter that I have named Francis, and threw some food at him.
That’s kind of a roundabout way to get to my scarecrow - but there’s the story. Whenever I see one of those crazy neighbors flying in this direction I fling open the lid of my barbecue and flash it, like an old man in an overcoat at the park.
Heh heh... take that Francis. 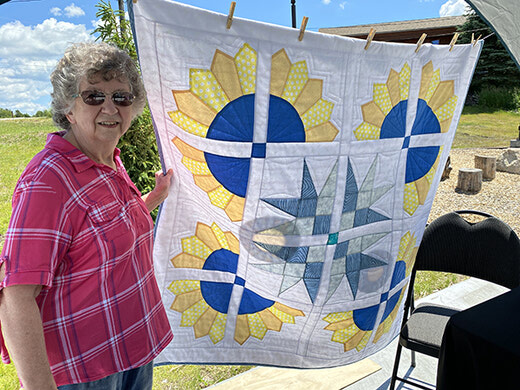 Independent Watkins Consultant Ingrid Cummings displays the quilt she created and is auctioning off to help raise funds to support those impacted by war in Ukraine...