On arrival at camp, I was greeted with a few tidy little piles of nuggets (sh**, to us earthy types who are not offended by bawdy house language) in the living room, a mess of candles, books and other items strewn from window sills onto the floor, a bag of dog food ripped open and mostly eaten, and a fist-size hole through the screen of a window I had left propped open a few inches.
After considerable investigation, I concluded that a marten had gotten in, made itself at home, then frantically tried to get out and finally found the open window, smashed a hole through the screen and jumped six feet to the ground to make its exit.
The unanswered question remained, how did he get in?
At 5 o’clock this morning the dog woke me up with growling in the living room. Hoping to see my first bear of the year (possibly beside the log outside where he had left the plumpest calling card I’ve ever seen) or maybe a moose passing through the yard, I jumped from bed, slammed my glasses on, and rushed out to the front room, sans fruit of the looms, even, and there was the damnedest thing! A CAT was racing, 100 miles an hour, at least, around the cabin, jumping and leaping from furniture to window sills over, under, around everything, with my two guard dogs in hot pursuit.
After bonking its head on the window that used to be open (I closed it before going to bed last night to keep the heat in) that cat disappeared somewhere in the direction of the bathroom and the bedrooms at the back of the cabin.
With that, I scratched my head, figured I must be having some kind of cool dream, possibly inspired by drinking the part bottle of wine that had been sitting in the cupboard for the last six weeks after supper last night, and promptly leaped (not wanting to stand too close to the bed, in case something might reach out and grab me by the leg) back into the sack, pulled a pillow over my eyes, muttered to the dogs, “A cat... strange” and fell back to sleep.
An hour later I woke again, stepped as far away and as fast as I could away from the bed, visions of my boyhood boogie man nemesis and some wild creature I had dreamed about raging through my foggy brain, grabbed a flashlight, and bravely peered under the bed...
Here’s what I saw.
A CAT!!
Our cabin is miles from any other building. There’s no road anywhere near. It’s hard to tell from the little I’ve seen, but this guy looks clean and well cared for. I don’t think it’s a feral cat - it’s really too calm for a wild animal. Its demeanor reminds me more of a pet that’s used to taking shelter from young children when they get too rough.
Whose cat is this, I wonder? How did it get here? Should I give it a name? What happens next? Should I wear chaps to bed, just in case it tries to claw me?
Post Script. Mary didn’t come to camp this weekend, so she knows nothing of Puss-In-Boots under the bed. I called her this afternoon...
ME: Will you run down to the leather store and get me a pair of chaps, please?
MARY: What? Chaps? What the hell do you need chaps for?
ME: I’m going to wear them to bed in case the wildcat comes out during the night.
MARY: Not gonna happen, Loverboy. 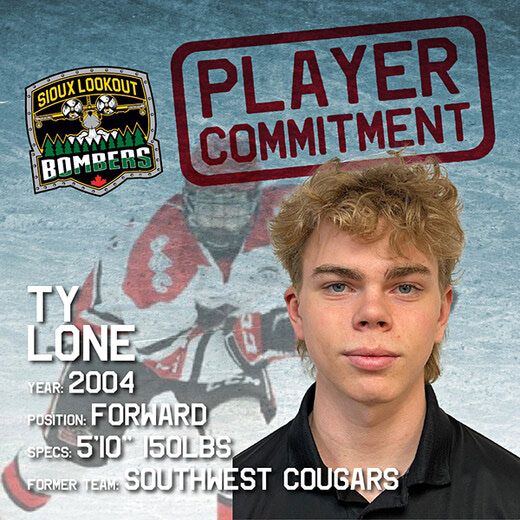 The Sioux Lookout Bombers are continuing to build their roster leading up to their Superior International Junior Hockey League (SIJHL) debut in September...