When I was younger and knew everything the answer would have been easy. Now, though, I’m somewhat confused, but I think the beauty on the trees is rime ice, created by freezing fog.

Or is it hoar frost?

In either case, the beauty is abundant. Grace and Wojo were so captivated they raced down the path to our dock to see if any boats had arrived overnight.

None had arrived, of course. We haven’t had open water for six or seven weeks, and don’t expect to see the shimmering miracle for about another four months.

Although they’re just dogs I admire their optimistic beginning to every day, as they race out and root around looking for whatever delights have showered down while they slept. 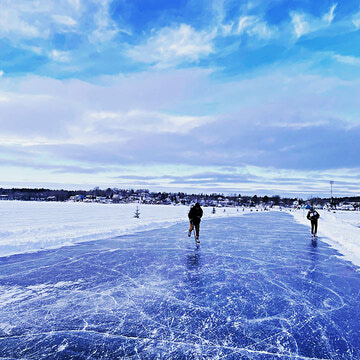 The National Hockey League (NHL) recently featured a photo of Sioux Lookout s Skating Trail on their Facebook and Instagram pages. While two local residents were out skating, Ethan Baas captured the mesmerizing moment on January 11, and Jordan Mekanak-...