Shortly after my arrival at camp Friday afternoon one of my chickadees flew right into a window. I rushed outside to have a look and, sure enough, there was the little creature thrashing in the snow.

Immediately I dashed over, plucked the bird out of the snow, and hurried inside where we sat on the couch for 10 minutes while I cooed and talked gently in my smoothest, soothest voice, assuring the chickadee she’d be all right.

Eventually she opened her big beautiful eyes, looked lovingly at me, and moved her beak lips silently, as if trying to thank me.

I shushed her and encouraged her to just rest.

In another minute or so the rested bird gave me a few love pecks on the thumb, so I thought the time was right. We walked to the door. I opened my hand and she flew away. As she disappeared into the trees I thought I heard her exclaim, “Thanks, my friend. When I come back I’ll sit on your shoulder and chirp happy thoughts into your ear.”

Then I went inside and started the fire, because it was cold.

Later that evening, in the wood fire warmth of the cabin, I was browsing BeakBook and came across the following curious comments from someone calling herself Chicky D.

“What a hell of a day I’ve had and a most scary adventure.

This afternoon I was flying and minding my own business when out of nowhere came a huge smack right to my kisser. Wham!

I ended up in a nice pile of soft snow, so decided to make a couple snow angels before resuming my trip to the feeder.

Now the scary part. As I worked my wings and legs to make the little snow angels a huge, ugly, hairy ogre appeared and snatched me up in his stinky hands and marched somewhere.

For the next few minutes I pretended to be dead as I plotted my escape. During the whole time the big bastard ogre kept making strange grunts and snorts and speaking in some kind of foreign language. I don’t know what he was up to, but I figured it must be some kind of ritual. He was planning to eat me.

After a while the beast got up and started walking toward his barbeque with me still clamped firmly in his grubby fingers. It was now or never. I gave a great thrust with my beak and stuck it almost all the way through his thumb!

At that, Mr. Stinky Ogre jumped about three feet high, threw open his fist, and I lost no time making my escape into the forest.

Although I was terrified, I kept my cool.

I’m going to go back in a day or two and when the ogre least expects it I’ll fly by and drop a big load of poop on his head.” 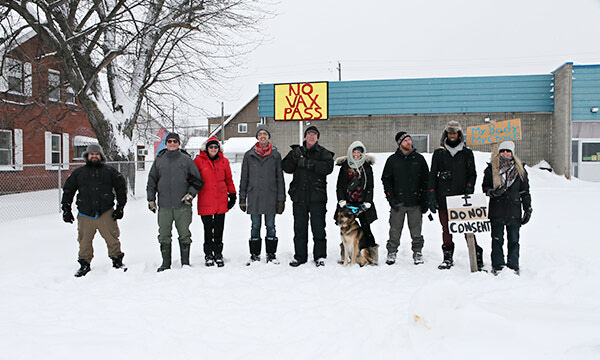 Local residents who have chosen not to receive a COVID-19 vaccination took part in a rally and march on Jan. 8, marching from the Travel Information Centre to Front Street...