A last look from Rotary Park, atop the hill beside the stone wall, before freeze up.
I think the new marina docks and the resurrected beach area shown in the pictures on this cloudy, gray day will both be beautiful features of our downtown gem. Can't wait to see them when the green leaves and the summer birds return.
Ice has been covering some of the quiet bays the last few nights. Temperatures are staying fairly cold. Don't know when we'll have freeze up on Pelican Lake, but am guessing in about two weeks.
The records started by the famous Elliot Brothers 87 years ago (1934), continued by Doug McIvor, then his son John McIvor show the earliest freeze up as November 10, 1991, followed by the 12th in '95 and the 13th in '59. Nearly half of the ice has happened in December. The latest was Dec.19 four years ago (2015). 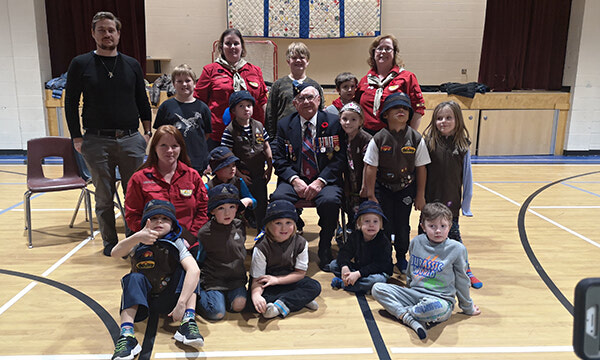 This past week, the 1st Sioux Lookout Beaver Scouts were fortunate enough to have Retired Captain Reg Drew take the time to visit us. We were very honoured to have him come in to help teach the children about Remembrance Day and the importance of such.