I’d rather nap with an alligator

I saw this alligator in a Florida swamp last week the day before we returned home from a visit in Florida. As I look back, I’m thinking it would have been less painful to lie down beside this guy for a nap than to try to get home flying with Air Canada.
However, after 36 hours without sleep - the first 19 of those thanks to several delayed and cancelled flights before even getting away from the Tampa terminal - we finally got back to Sioux Lookout.
Those wonderful hours hanging aimlessly around the terminal with a small community of other displaced people (some of whom had been there for two days) resonated with dark humor delivered slapstick style by a bunch of punch drunks. It wasn’t totally unpleasant.
Responding to the recorded public address announcement urging anyone seeing something suspicious to report it immediately, my tattooed biker buddy tried to report our bald headed friend wearing a bright sweater, who had dozed off, as “an orange blob with no hair, left unattended in a lounge chair.”
Memorable was the Toronto guy wearing plaid shorts who had gotten a deal on clamps (the devices to hold pieces of material together while the glue dries) at a Tampa Home Depot who was wrestling a duffel bag as big as he was full of them, while sporting three straw hats atop his head (I didn’t ask), one on top of the other. I called him “Cat in the Hat” which he thought was funny.
After several security checks and a customs clearance at 3 a.m. I had mixed feelings at the final security stop when my watch with a velcro closure on the strap attached itself to the little strips covering the x-ray box at the end of the conveyor belt. Since the guards had already confiscated my hand cream (container too large) and squeezed the bejesus out of my Polident (looking for suspicious lumps, I guess) and lecturing me about packing the large size tube, I didn’t know whether to call attention to myself by asking for help, or to just walk away and let the next shift coming on later wonder why a Timex was dangling from the spy machine like a crippled kite caught in a tree. 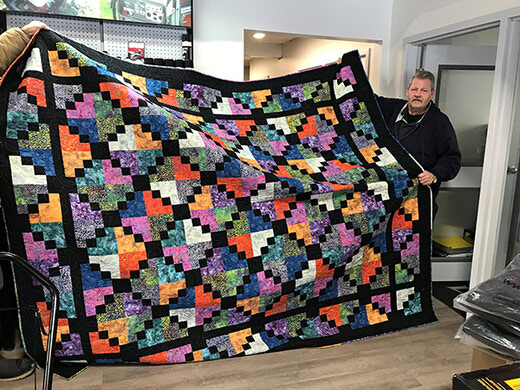 Bruce George, of Sioux Lookout, was the winner of the Sioux Lookout Material Girls Quilt Guild raffle. The draw was held on December 17th...