Hobo, a chickadee without a tail, has been flitting in and out of my feeder for the past couple days. He stands out from the dozen other chickadees madly snacking on sunflower seeds because he has no tail feathers and he looks strange. Freak-like some might describe.

As I sit admiring Hobo, the cheerful, unassuming, hard-working, freak-bird finding his spot among the seeds with all the other feathered feeders my mind wanders to a night more than 50 years ago when I was a boy 12 or 13 years old.

Sandra was a neighborhood girl about my age. She lived just down the street.

Our little gang of friends didn’t see much of Sandra. Never included her in our play. She’d had rheumatic fever and was weak and sickly. We were told she was fragile, delicate, had a bad heart. And she was not a pretty girl – not by a long shot.

We didn’t hate her. We just didn’t think about her much.

One late summer day Sandra came to my house to invite me, as her special guest, to her birthday party. I was 12 or 13. Puberty was in high gear. It was raging. It was out of control. Girls were the world. How I wished I could go to the party with Betty, Joan, Mary, Susan, Janis or any one of the good ones.

I said yes to Sandra.

The night of the party, in the basement rec room of Sandra’s parents’ home, came eventually. Although I’d spent a couple weeks wishing I were somebody else’s date, I couldn’t figure out a way to weasel out of my commitment, so I washed up and cleaned up and trudged up the block to Sandra’s house.

The party was fine. It was a bunch of kids doing kids’ stuff, but typical for the times and young people our ages. Nothing as risqué as spin the bottle.

The highlight of the party was dance time. I don’t remember what the first record was – probably Rockin’ Robin or I Just Want To Be Your Teddy Bear, or some such romantic music of the era.

Greatly embarrassed, I asked Sandra for the first dance.

A gangly, scrawny kid and the world’s homeliest girl stepped up awkwardly and tentatively, all alone on the tiny dance floor, embraced with the music… and were greeted with the most enthusiastic cheers and claps that could ever rise from a gang of fellow adolescents.

It was magic. Sandra was the most beautiful woman in the world at that moment. She was an absolute sparkling princess. And I was transformed from an embarrassed kid to a proud prince for a wonderful moment.

I don’t know what ever became of Sandra, but every once in a while I wonder.

She may have received her high school diploma in a hospital bed and died the following week after a long struggle with poor health.

Or maybe she has made a great contribution to humankind, confined to a wheelchair like Stephen Hawking.

Perhaps Sandra, somewhere, sees a scene of nature that kindles a kind memory and adds a puzzle piece to the picture that has created her.

I just saw a bird without a tail. 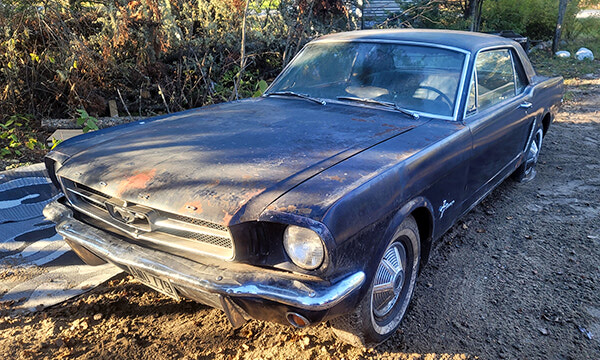 It s all original, it s got a clean title, and it drove last in 1982.
That s how Andrew Wallace begins to explain the 1973 Mustang Mach 1, a piece of automotive history, sitting on a trailer in his yard...