Did I really see that?

I was awed yesterday by a little dog and pony show as my friend and I sat with morning coffee at the lakeside bar.
I caught a movement from the corner of my right eye. Turning quickly I saw a running rabbit that loped clear across the yard and disappeared into the woods.
As I turned back I caught another movement from the corner of my right eye where the first rabbit had come from. I looked to spot the second rabbit, but once focused saw that it was a marten.
To my astonishment, that boy climbed the steps and joined us on the deck. After about 10 seconds sniffing around he spotted us, Grace still dozing at my feet, and bounded off back down the steps and under the Palace.
About then Grace came to life, nose twitching furiously, and she leaped down the steps into the yard, picked up the rabbit scent, and went full speed to catch the rascal.
As soon as she disappeared into the woods the rabbit blasted out, racing about 100 miles an hour, back toward where he had come from, with Grace one foot behind him, also racing at about 100 miles an hour.
After a quick run, diagonally through my garden with leaves and tomatoes shooting up like fireworks, the two of them disappeared under the Palace.
"This should be interesting," I mused to myself.
After a couple thumps that I could imagine were heads bumping joists there was complete silence, and in a minute Grace came back and resumed her snooze at my feet.
And I was still shaking my head in wonder, asking myself if I had really seen that.
Later in the day, in the Palace, grilling my diet dinner of sweet corn, fresh garden zucchini, and center cut pork loin chop, cut an inch and a half thick, topped with homemade orange marmelade, I wondered what had gone on underfoot after the head banging on the floor joists stopped. 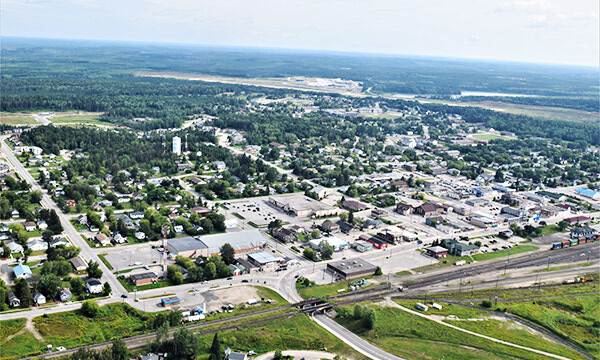 Slate Falls Airways provided participants with some of the best views of the Sioux Lookout area during their annual...