This morning I was up on the roof taking pictures when my friend Pie called. Luckily I had my phone up there with me.
I wanted to update my friends with a picture of Cheech and Chong, the two trees I accidentally disfigured last winter while cutting down some nuisance poplars nearby.
My two crippled boys - one with no limbs and the other without a top half - are looking pretty unique and spiffy in the front yard, but I’m having a hard time finding a photography angle that shows them off.
That’s why I was trying to climb the stepladder I’d balanced in the trailer of my ATV last night. I’m not sure why Mary came running when she caught sight of my photoacrobatics balancing act. I didn’t have my hearing aids in so didn’t catch everything she said, but I know she was pretty excited and the words fool, dumbass, wine, broken neck spilled out of her mouth as she grabbed hold of the ladder. So I climbed down to hear better what was so exciting.
I’d like to think she was admiring my prowess and determination to get a good picture. And she’s the one who made the great suggestion that I climb up on the roof (TOMORROW!!!) and try from there.
So, at 8 o’clock this morning, I was up on the roof when Pie called. I described the weather and told him what a nice day it was so far. He was impressed, I think, when I told him Cheech and Chong were a handsome couple and I was taking pictures of them from the rooftop. 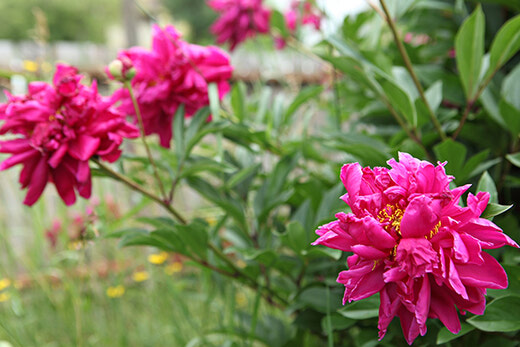