A little book of poetry

A year ago a man walking in a Thunder Bay library pushed past a cart loaded with old books destined for the recycle bin. He accidentally brushed one of those books with his arm and it jumped from the cart and plunked itself onto the floor, leaning slightly against the wall.
In 1972 I published a small book of poetry. Although I was excited to write a book, another side of me was somewhat anguished, as I was not proud of the content, a disappointment with myself that grew during the following years.
Friends bought my book. I surreptitiously dropped a few off here and there, including one that I left on a library counter when nobody was looking. Even a co-op bookstore in Thunder Bay agreed to take 10 on consignment, to sell for $2 apiece.
A year later, a good friend confided that she had been in that bookstore and happened across my books on a shelf - all 10 of them, marked down to a nickel. She bought them all, embarrassed for me.
Over the next couple years I took every opportunity to beg back, or sometimes to steal back, every book I could find from every friend I could remember who had one, including the one nestled in my wife’s bookcase.
The man in the library bent over to pick up the fallen book to place it back on the cart. Lilacs and a Crushed Peony, he mused, scanning the title. He had never heard of it - nor had he ever heard of the author. Being an amateur collector of rare books, he took it home with him.
In about 1981 or ‘82, I had gathered up every book I could find, including a few hundred that remained unsold, carted them off to one of the bush dumps that MNR used to operate. In only a few minutes I had climbed down into the pit, stuffed every one of those damn little embarrassments up into an overturned washing machine, and dragged a dozen Jack Pine boughs over to cover the evidence.
I had a wonderful feeling, a sense of relief, that the burden of the book I had come to despise had come to an end. For the rest of the summer I visited the dump site often, to make sure my burial hadn’t been discovered.
My joy was complete the day I went there and found the whole pit filled in and covered over by bulldozers.
Almost three decades passed, with rarely a thought of that book. I buried the memories, as well as the books, in that pit. It was the right decision.
A few months ago a message arrived in my Facebook account. “I don’t usually contact strangers, but I looked you up because I found a book at a library in Thunder Bay and I’m wondering if you are the man who wrote it?”
Three days ago, after months of talking and texting, my new-found friend and I met in a Thunder Bay restaurant and enjoyed a marvelous meal and great conversation over a bottle of wine.
The guy with the book is Mauri “Mo” Marchand, a talented man with various interests, but most well known as the drummer in the band “The Sensational Hot Rods” ( www.thesensationalhotrods.com ) which has played throughout North America during the last 20 years.
Coincidentally, I had been the emcee at several events the hot rods played in Sioux Lookout over the years. I had announced their performances. Seven years ago I met the whole band in their dressing room as I gathered information for their introduction.
Reluctantly, our long, pleasant evening had to conclude. Mo extracted an autograph inside the front cover, though, as I assured him it is, indeed, a rare book. My hope was that it might be the only copy still in existence.
And, although the book sat on the table all evening, I wasn’t tempted to even peek inside. After all these years, I still don’t want to be reminded. 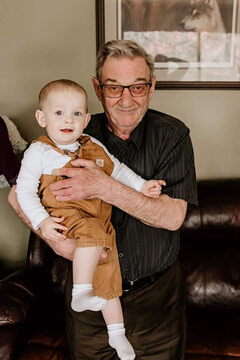 What is the measure of a good life? If you ask 10 people, you ll probably get 10 different answers, but for George Samuel, who turned 80 on Jan. 30, it s not really a secret.
Enjoy what you are doing, especially at work, Samuel said..,