The Municipality of Sioux Lookout is urging boaters and anyone using area waterways to exercise caution. The current high-water levels have resulted in a lot of debris in area lakes and rivers. The Municipality notes that in some instances markers may have been moved, and rocky areas that may normally be visible could be hidden underwater at this time.
The Municipality is also reminding boaters to avoid coming too close to shorelines when traveling, as the wake produced can exacerbate the impact of flooding on low lying areas.
In an email statement received May 27, Sioux Lookout Ontario Provincial Police (OPP) noted, “The Ontario Provincial Police encourages boaters to be safe out on the lakes and recognize that every time they go out there are hazards, both above and below the water, that they need to be aware of and continuously monitoring for. The current high water levels bring additional safety considerations when out on the water. Common landmarks may be currently submerged, causing both navigational difficulties and submerged obstacles. In addition, a large amount of shoreline debris has been pulled into our local waterways, creating boating hazards that can damage or capsize your vessel.”
In addition to the warnings issued as a result of the high water levels, the OPP also wished to remind boaters of more general water safety tips, including:
•    Never boat under the influence of alcohol or other intoxicating substances, as this impacts your ability to respond to changing conditions and make safe decisions on the water. Impaired Operation is a Criminal offence, be it a boat, car or truck. Consequences of impaired boating include loss of your drivers’ license and impoundment of your boat. Impaired driving penalties increase substantially if you injure or cause death to someone.
•    Always wear a properly fitted lifejacket or personal floatation device (PFD). Many deaths on our waterways each year could have been prevented if the individual was wearing a PFD.
•    Have a map, plot your course, and use your navigation equipment to monitor your location. You may also consider downloading the What 3 Words app before heading out, which can be used to locate you in case of emergency. This app is already being used by the OPP Provincial Communications Centre for its precise coordinates, which prove more accurate than traditional GPS. App users are reminded that without a phone signal they will not be able to share their location directly from the app if in need of life-saving assistance.
•    Stay connected. Keep your phone in a waterproof case and always ensure it is fully charged before heading out. It is important to note that not all locations in OPP jurisdiction have cell phone service. Do your research, and consider an alternate form of communication such as a satellite phone or other satellite communication device.
•    As well as required safety equipment, boaters should consider packing some warm clothing layers, tools and spare boat parts, a first aid kit, and drinking water and snacks with them, in case they run into troubles on the water.
In a May 25 update to the Lake of the Woods Control Board’s (LWCB) Notice Board, LWCB reports that “Lac Seul inflow is extremely high, resulting in a rise of 37 cm (15 in) over the past week. Additional outflow increases took place over the past weekend, with outflow now at 810 m³/s. This is a very high outflow, last reached in 2008. An additional outflow increase, to 850 m³/s, is scheduled for Friday, May 27 with further increases possible over the next week.” 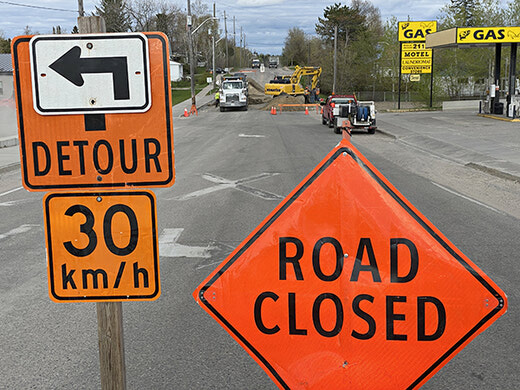 The Wellington Street detour will remain in place longer than initially expected according to the Municipality of Sioux Lookout...