Angeconeb has been the organizer of “Orange Shirt Day” activities in Sioux Lookout since 2017.

Angeconeb was a member of the former Sioux Lookout Anti-Racism Committee for more than 20 years.

The nomination for Angeconeb states, “Darlene is the chair of both the Police Services Board and Mayor’s Committee for Truth and Reconciliation. Both committees have been working on some of the most difficult issues faced by our Municipality. As chair she moves the work of both committees forward while ensuring all perspectives are considered.

Angeconeb was recognized by Nishnawbe Aski Nation as a woman leader in January.

“Darlene was born in Sioux Lookout and is a Lac Seul First Nation band member residing in Sioux Lookout. She was sent to the Pelican Lake Indian Residential School at the age of six. During that time, she attended schools in Sioux Lookout (Wellington and Central Public Schools and one year at Queen Elizabeth District High School). She completed high school in Sault Ste. Marie and later studied Fine Art at Ontario College of Art and then Political Science at Algoma and Laurentian Universities,” her nomination reads.

“Darlene has worked for Equay-Wuk Women’s Group since 1999. She has filled the role of Acting Director since 2012. The position has been “acting” due to the fact that it is not funded, except when project funding is received. Darlene continues even between projects as she is dedicated to community development and especially the empowerment of women.

“One of her remarkable contributions is how she seamlessly acts as a bridge between the Sioux Lookout Indigenous agencies/people and the Municipal/mainstream.” 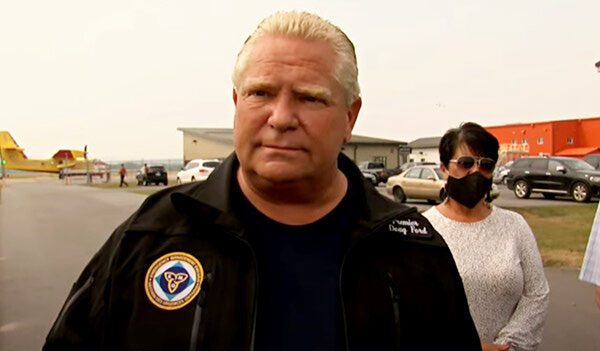 Ontario Premier Doug Ford was in Thunder Bay on July 28 visiting the Ministry of Natural Resources and Forestry Fire Management Headquarters and meeting with evacuees and community leaders....