Dancers showcase their skills, talents at end of season recital

Children enrolled in ONYX Dance & Fitness Studio’s dance program performed in their first recital last Sunday afternoon at Sacred Heart School.
Dancers performed five routines in addition to a finale in which all of the program’s dancers took part.
ONYX Dance & Fitness Studio Director Manuela Michelizzi performed a routine with her daughter Emilia called Love, in memory of her late cousin Cosimo Racco.
“My cousin was a constable with the Thunder Bay Police Service and passed away on April 13, so we wanted to do something to commemorate his memory,” she shared.
“It’s been a great season. I think the students learned a lot and they did well. This is their first performance for a lot of them. I’m hoping as there are more performance opportunities their abilities and comfort level on stage will be able to grow. We’ll be able to showcase even more skills as the program continues” Michelizzi said.
Dancers spent the beginning of the season learning techniques in order to put movements together to create a routine.
“Rachel (Kalas, Associate Instructor) and I put those moves together into a routine that would really highlight what the students had been learning, give them a bit of a challenge in terms of technique to really show that they had been working hard, and we wanted to give a well-rounded program with some slower pieces and some more high energy dances,” Michelizzi added.
Thirty children, from age three to grade 6, took part in the dance program this season, which began in January and concluded in April.
Onyx Dance & Fitness Studio also runs an adult ballet program.
Practices have been taking place at St. Andrew’s United Church.
Michelizzi hopes to expand the dance season next season from fall until spring.
“The idea is to create two streams of dance, a recreational program of students that want to dance but aren’t so serious, and a competitive stream where we can take students to various competitions in the region,” she explained.
This season has been a learning experience she said, “There’s been some challenges along the way. Mainly we’re having to modify our classes to accommodate the lack of equipment, so we’re still looking at acquiring ballet bars for our technique classes,” she commented.
Pre-registration for next dance season will begin in August for recreational and competitive groups.
Michelizzi thanked St. Andrew’s United Church, Sacred Heart School, The Northwest Catholic District School Board, Inspiration Photography by Mellisa and The Sioux Lookout Bulletin for their support this season.
Michelizzi also wished to thank International Dance Academy in Thunder Bay. “It is one of the former studios I danced at growing up and they donated shoes and dance wear for our dancers. They wanted to make sure that we were able to reach as many children as possible, even those that might not be able to financially afford dance wear and shoes. We will have all the items available for students in the fall.”
Admission for the recital was by donation, with all proceeds going to support one and a half year old Viera Bernier, who has been diagnosed with cystic fibrosis.
“We are very much a community dance studio and we do this because we love to do it and we want to help as many people as we can,” Michelizzi concluded.
People can find out more about dance programs and pre-registration by visiting ONYX Dance & Fitness Studio - Sioux Lookout on Facebook. 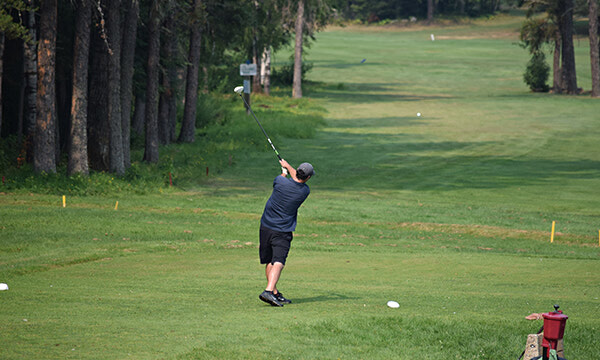 The golf course at the Sioux Lookout Golf & Curling Club officially opened for the season on May 11, and the course has been in steady use ever since. Winter greens have been temporarily set up on holes...