The Sioux Lookout Golf and Curling Club (SLGCC) is excited to host several curling events within the next couple months.
Their first event of the New Year is a Doubles Day Bonspiel on Jan. 18, which will have a “007” theme.
“The doubles league is something new that we wanted to start this year because it’s become very popular across the region. We ended up with eight teams this year as a starting point. We only ran a six-week session before Christmas just to see how it would take off, so that’s why we got the idea to do a bonspiel to see if the interest is still there. The Doubles Day Bonspiel has a 007 theme, and it’s going to be a martini night,” said JoAnne Van Horne, Project Administrator, SLGCC Board of Directors.
“It’s a fun evening, but it’s a bit more challenging of a game. You do have to kind of know how to curl. It’s a very physical game, but we hope to get people out for that,” she said.
At the end of the month, from Jan. 31 to Feb. 2, the SLGCC will be hosting the Northern Ontario Curling Association Under-18 Regionals, which will see local participation from the Sioux North High School girls’ curling team. If they are successful, the local girls’ team could move on to Provincials.
“Because we’re a member of the Northern Ontario Curling Association, every club in our region has to host an event so this is the one we chose. Right now we have our high school girls’ team participating. It will be an all-weekend affair, and there will probably be six teams in total. There will be teams coming from Fort Frances, Kenora, Red Lake, and Dryden. It’s a regional thing, and it’s very good curling at that level,” Van Horne explained.
A popular event that will be hosted once again is glow-in-the-dark curling on Feb. 8. Van Horne said last year’s event featured 16 teams that participated in the fun evening of curling.
“People seem to like that event and they ask us about it every year, so we have a ladies team from the ladies league who are organizing that and taking it on. It’s a lot of set up to get the glow going on, but I think we had 16 teams for that last year. It’s just a fun night of curling,” she said.
Curling Day in Canada will be taking place across the nation on Feb. 22. Curling clubs across Canada will be participating in events to encourage Canadians to get curling.
Van Horne said the SLGCC is still planning their Curling Day programming, but she confirmed that they will be offering a free curling day.
“That’s a nation-wide day, and the concept for that from Curling Canada is to get as many people curling as we can in one day. We decided to do a free curling day. We might offer stick curling, or we might offer a lesson on curling… The main goal is to promote the game of curling,” she said.
The SLGCC will be hosting a Rocks and Wings Spiel sometime in March, which is designed to be a fun evening of curling and enjoying chicken wings. The club will then close out their season with their annual league championships, followed by a social and dance, on March 27.
Van Horne said the club has seen interest in two additional leagues this year.
“This year we did the doubles league and the business league. The doubles league is new and we brought back the business league. We think the interest is there to keep those two newer leagues going… We’re keeping the doors open, and a lot of clubs have closed. I can’t say enough on how we appreciate the younger generation supporting our club,” she said.
Coming up on Jan. 26, the SLGCC is hosting their annual club meeting. Van Horne is encouraging community members to step up and become new board members.
“The Sioux Lookout Golf and Curling club’s annual meeting is coming up on January 26, and that is when we can elect new people on our board. You can come and find out how the operations run and you can have a look at our financial report. We need new people. We need new people to step on to the board of directors. That’s how the board is run and that’s how the club is run, so it’s important for new people to come and get involved,” she said.
Van Horne said those interested in any of the upcoming events can sign up at the SLGCC, which is located at 87 3rd Avenue North. She also encourages people to come forward with new event and bonspiel ideas.
“They’ll be able to sign up at the club. There are always signup sheets right when you go in the door. Keep watching our Facebook page because everything is on there, and head out to the club to sign up!... If anyone has any ideas for a bonspiel or an event, come talk to us and we’ll gladly see what we can do,” she said.
People can find out more about the club and stay up to date on its happenings by visiting their Facebook Page, Sioux Lookout Golf and Curling Club. 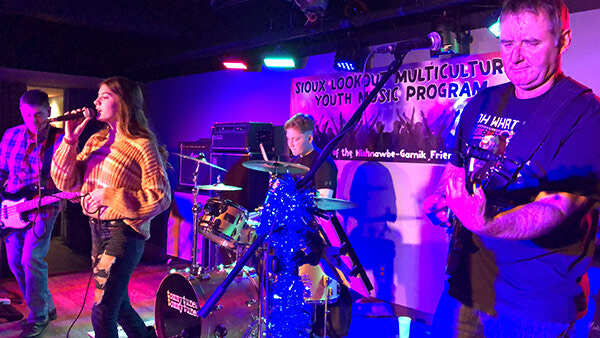 The band Hot Mess entertained visitors to the Sioux Lookout Multicultural Youth Centre on Dec. 20 with songs of the season and a variety of cover songs.