Thanks to funding support from Health Canada’s Substance Use and Addictions Program, an improved Crisis Response and Harm Reduction Mobile Outreach Team will be established in Sioux Lookout.
The initiative will be a collaboration among the Northwestern Health Unit (NWHU), Sioux Lookout Ontario Provincial Police (OPP), Sioux Lookout First Nations Health Authority (SLFNHA) and the Canadian Mental Health Association (CMHA), Kenora Branch.
The aim of the project is to build off the Joint Mobile Crisis Response Program which ran from February 2019 to February 2020.
That one year pilot project was a collaboration between Sioux Lookout Meno Ya Win Health Centre and the Sioux Lookout OPP, made possible by short-term funding obtained through a Government of Ontario Proceeds of Crime Frontline Policing Grant. The initiative employed a single mental-health clinician who worked directly with frontline police to respond to mental health and addictions related police calls for service. During the year it was operational the Joint Mobile Crisis Response Team connected with approximately 150 individuals experiencing crisis. These individuals were provided with direct access to health care and support services.
Gillian Lunny, Manager Sexual Health and Harm Reduction for the Northwestern Health Unit, said “That project showed to be so successful. Having talked to the OPP, seeing their statistics and having had a chance to speak to the nurse that was in the role, it had a real positive impact on Sioux Lookout. When that funding ended, the Northwestern Health Unit stepped up to put in an application to try to keep the project going for at least a few more years until permanent funding could be secured.”
The new Crisis Response and Harm Reduction Mobile Outreach Team will be made up of two CMHA nurses, two Nodin Mental Health Services (SLFNHA) counsellors, and a physician.
“The project will also support an after-hours call-in/text line managed by Nahnahda-Wee-ee-Waywin that provides 24/7 crisis intervention services to individuals in local and remote communities. The goals of this program include improving collaboration amongst local and regional service providers, provide timely access to mental health and addictions services and reducing the number of incidents that result in emergency department visits and criminal charges,” NWHU explained in a news release.
Health Canada’s support will fund the Crisis Response and Harm Reduction Mobile Outreach Team for four years.
“We’re hoping that within the four years we’ll be able to show the need, be able to have the stats to show that this is something that is needed permanently. Part of our plan, especially in our last year, is to try to secure permanent funding,” Lunny said.
Explaining how the Team will work, Lunny said, “The nurses with CMHA will be going out with police attending the crisis when it happens and providing that immediate support. What the counsellors will be for is that post crisis, but then also to do some of that work to help prevent it in the community… It was one of the gaps identified with the one year project, was that we need to have that follow through support with anyone in crisis.” The project will be administered at Northwestern Health Unit on behalf of the group.
Crisis Response and Harm Reduction Mobile Outreach Team partners have been meeting for months and the initiative is in the recruitment process presently.
Lunny said the hope is to have the initiative operational this year. 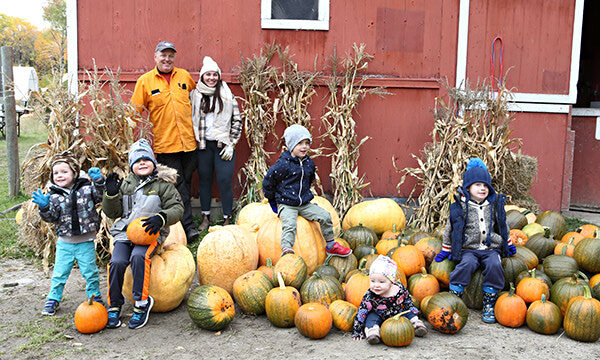 Approximately 250 pumpkins were for sale by donation at the Cedar Bay Stable on Oct. 3.