Taxis in Sioux Lookout are no longer being regulated by The Municipality.

Municipal Council made the decision at their Feb. 19 regular meeting.

According to information shared by The Municipality of Sioux Lookout, “Council arrived at this decision following two years of reviewing the local transportation sector in Sioux Lookout. The expansion of ride-sharing services within the Municipality, the introduction of a local transit service (Hub Transit), the proliferation of organizations providing their own transportation services to their clients, and concerns from Taxicab Operators of over-regulation were all factors that lead to the decision to deregulate the taxicab sector.”

The Municipality further shared, “The rescindment of the Taxi and Limousine Licensing By-law means that the Municipality is no longer regulating the taxicab sector. Deregulation will have the following impacts:

· Fares charged by taxicab operators are now at the discretion of the Operators –Council no longer sets the fare rates.

· Operators are no longer required to submit their taxicab vehicles to the Municipality’s By-law Enforcement Department for inspection (all other provincially mandated inspections are still required).

· Drivers are no longer required to submit Criminal Reference Checks, Drivers’ Abstracts and related documentation to the Municipality.

· Other transportation service options (e.g., taxicabs from other jurisdictions, ride-sharing and ride-hailing services (e.g. Uber)) are now free to operate within the Municipality.

· All other licensing requirements that were imposed upon Taxicab Operators via the Bylaw have been eliminated.

Council also passed the following motion, “That Council directs staff to monitor the deregulated taxi sector for a one-year period, track complaints and concerns from the public during this period, and report back to Council during the first quarter of 2021.”

The Municipality shared, “Council may revisit its decision to deregulate. Persons who wish to file a complaint, are encouraged to use the Municipality’s “Service Request” system, by calling 737-2700 or visiting our website: ·https://www.siouxlookout.ca/en/email/emailattachment.aspx?id=549&ref=https://www.si ouxlookout.ca/en/your-local-government/service-request-form.asp.”

In January taxi operators from three companies in Sioux Lookout told council they felt they were being overregulated and that proposed fees for checking their meters and insurance could endanger their businesses.

Gord Campbell of G&R Taxi told councillors, “We can’t operate under these rules and regulations. We are free enterprise. We don’t need people who don’t have a clue what they’re doing, have no concept of what goes on on the streets, making rules and regulations for us.”

He added, “I got 50 years in this and right now you’re stealing my livelihood away from me.”

Randy Doran of Sandy’s Taxi said he agreed with Campbell, as did a representative from Sioux Taxi.

Doran asked, “As far as a licencing increase, last year it was a 25 per cent increase, this year is a 33 per cent. Why has it gone up so much?”

At Council’s Feb. 19 regular meeting, Adam Kelly of A&A Taxi shared with Council, “The taxi industry is huge in Sioux Lookout. It’s over a million dollar industry, guaranteed.  To deregulate… there’s no municipality out there that doesn’t regulate taxis, so why are we deregulating?”

Councillor John Bath, filling the role of Acting Mayor in Sioux Lookout Mayor Doug Lawrance’s absence, stated, “I see no reason why taxi drivers should be treated differently. I don’t think they should be treated, as the bylaw almost says, they’re criminals and need to prove they’re not. That’s not the case. They’re people earning a living.”

He asked Kelly, as a taxi operator, why he would not like to see the industry deregulated.

“So transportation all across Canada., whether it be airplanes, rail, ferry, every kind of public transportation is regulated in Canada including taxis in all municipalities. So Sioux Lookout is setting a precedent (that) we’re not going to regulate? Even though it’s proven that we provide safe transportation. It’s proven. We don’t have any complaints. You’re going to get criminals out there running around in public possibly. It’s happened in Sioux Lookout before where people are soliciting people in the bar when they’re at their most vulnerable point, and they’re offering them rides,” Kelly said. “Why wouldn’t we want to regulate? It’s a safe option for the public,” he added.

Kelly concluded by stating, “And the safety issue, you guys read my email, it’s huge. Why would we take the risk when we know the bylaws that are in place provide safe transportation to the public of Sioux Lookout. Why take the risk?”

Councillor Joe Cassidy commented, “We have so many other transportation sectors in town other than taxis. You have the hospital, you have SLFNHA (Sioux Lookout First Nations Health Authority) running shuttles. You have hotels shuttling people around. These are all transportation industries. They’re all regulated by their bodies as well, not by the Municipality. The mentality, the discussion council had at the time was that lets let the businesses… let’s see what happens. You can have Uride, you can have Uber, or Lyft, or all these things coming in and then we have to regulate them. The question becomes do we have to regulate SLFNHA and their vans, their transportation.  Where does it stop? Mr. Kelly, I think the biggest thing we discussed was we heard feedback from the industry, it’s unfortunate you weren’t there, but we heard the feedback from the industry about overregulation, overregulation, and at what point do we say, let’s let the businesses decide how they operate their shops and let that service that you are going to provide be the standard you set and be a benchmark for everyone else to achieve.”

Bath shared after the meeting that taxis have been a regular topic of discussion at council meetings, “I’ve been dealing with it for three terms of council and it always comes up and it usually comes up every time staff wants to change the bylaw, change the rates, change the fees, it’s a battle. I’ve always been in favour of deregulating taxis.”

Bath, Chair of Hub Transit, said in response to the allegations laid against the transportation service, “Yes, there are some instances where our drivers do door to door pick up for older people, certainly if they’re infirm, they get picked up door to door, no question of that. And it goes beyond that, unfortunately drivers have personalities and it’s a cold day, so they’ll pick people up. There’s an issue there. We know it’s there. We’ve had several meetings and we need to have more meetings. We have a director of operations now with Hub Transit and that’s one of his jobs, to make sure it starts following the route. There are scheduled routes, they’re laid out very plainly, but the drivers have time to sometimes wander off a bit and they do. They’re people.”

New signage for the Hub Transit should be going up this spring. 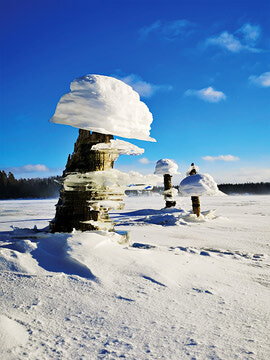 Snowmobiling enthusiast Mike Starratt shared these photos with The Bulletin of stumps and ice formations he came across while riding on Lac Seul.