Sioux Lookout Municipal council has directed Municipal staff to finalize the 2019 Municipal budget with a 1.7 per cent rate increase.

Council made the decision at a special meeting on February 28, where they received information on, and discussed, the third draft of the 2019 Municipal budget.

$90,880 was also identified as an operations budget shortfall.

Approximately $30,000 was removed from the capital budget deficit presented that evening by moving the cost to renovate space at the Heritage Train Station into offices to long-term debt.

Municipal Treasurer Christy McIntomney shared at the meeting, “We sat down with the managers and each manager went through their budgets, we cut, and I think they did a very good job. We’re, I believe, as low as we can get in the budget.”

Council did at one point, considering reducing transfers to reserves, but ultimately decided against doing so.

Lawrance shared in a statement to The Bulletin following the meeting, “This year’s budget process was influenced by several coincidental events. The 2018 Provincial election brought in a new government and new direction that continues to unfold. We held our Municipal election and a new Council started in December. We also had our new Municipal CAO start in August. With all those changes Municipal administration and staff were still able to lead us through a very good budget process. Starting in December and culminating at the end of February staff presented several budget drafts which responded to the service needs of the Municipality.

“After public input and with direction from Council draft three was presented to Council on February 28th. Following good discussion and debate by Council, direction was given to Staff to finalize the budget with a 1.7% rate increase. The budget will be ratified at the March Regular Council Meeting…

“The operational budget benefited from approximately 2.75% growth in assessed property value which includes phased in assessment as well as new builds. However, the operational budget also has to deal with contractual cost of living increases in both wages and products, increased cost for outside agencies, and filling vacant positions that were not budgeted for last year. Staff have done an excellent job of meeting budget challenges. Overall I believe that all involved can say that we had a thoughtful, open and transparent budget process. I continue to feel very positive about Sioux Lookout’s situation - our Council, our Staff, our population, and our growth together as a progressive community.” 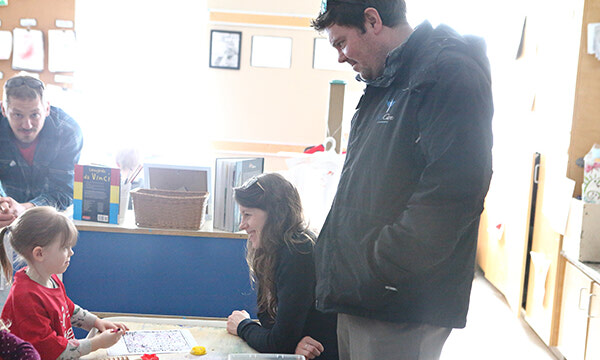 Both Sioux Mountain Public School and Sacred Heart School welcomed prospective kindergarten students and their parents guardians into their kindergarten classrooms to give them an opportunity to find out more about the programs and how to register...