Sioux Lookout residents will be voting for a new Municipal Council member in a by-election later this year.
At its October 16 meeting, Council, in accordance with Section 262(1) of the Municipal Act, 2001, as amended, declared the seat of Councillor Calvin (Cal) Southall, Councillor-at-Large, to be vacant, as a result of Southall’s death on Sept. 18 due to complications from his cancer treatments. Southall was serving his third term on Council.
Council directed Municipal Clerk Brian MacKinnon to commence the process to fill this vacancy on Council by holding a by-election to fill the vacancy.
Several Councillors, including Joe Cassidy, Cory Lago, and John Bath, felt with approximately three years remaining in Council’s four-year term, a by-election was the best way to fill the vacancy on Council.
A bylaw authorizing the by-election was to be brought to council at a special meeting of council yesterday (Oct. 22).
Asked when voting might take place, MacKinnon responded, “It will likely be December 22nd, however, a number of things need to be determined first.”
MacKinnon informed Council the by-election must be held within 60 days of the by-law authorizing the by-election being passed.
Voting would take place, as in the last Municipal election, by telephone and Internet.
Members of the public will be notified how they can run for the vacant Council seat. 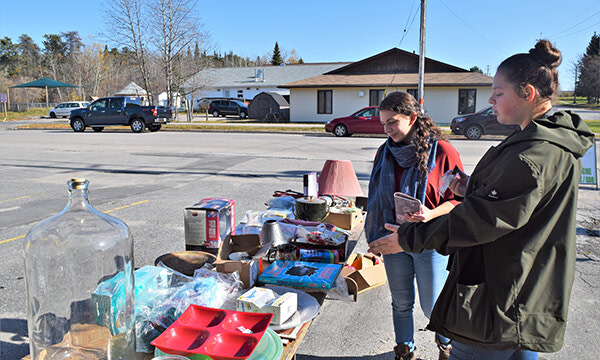 Sioux Looks Out For Paws hosted a two-day yard sale on Oct. 19 and 20 at the Sioux Lookout Fire Hall. Community members were able to support the local animal rescue while purchasing household items, electronics, and even Halloween costumes.