Confederation College’s Communications Officer Katherine Brooks shared, “We were unable to offer a ceremony last year, and instead shared a video with graduates and focused on in-person diploma deliveries to select award winners, along with some online contests for all graduates. With more preparation time this year, we were able to fully explore our options and were pleased to offer the formal Virtual Convocation that followed a more traditional Convocation ceremony agenda. As a result of not having a ceremony last year, the Class of 2020 was invited to participate in this year’s Virtual Convocation ceremony.”

Brooks shared that each graduate had the opportunity to register for the ceremony, to have their names appear on screen and read out by an orator. Registered graduates could also share a photo, video, and/or a message to appear alongside their name. The Virtual Convocation ceremony can be viewed at https://www.youtube.com/watch?v=SoLkjEQKHO8.

“Graduates demonstrating leadership, resiliency, impressive character and/or academic excellence, who have made a contribution to the College community, were selected across Confederation’s campuses and three academic schools. These graduates are examples of student success, proudly representing the Class of 2021,” a news release issued by Confederation College informed.

Three graduates from the Sioux Lookout Campus for the Class of 2021 were awarded with the Academic Award of Excellence, recognizing full-time students with the highest academic standing from each postsecondary program, with a minimum 3.50 grade point average requirement.

Brooks shared, “She (Schrock) achieved the highest academic standing with a minimum grade point average of 3.50 in a diploma level program. She graduated from the Native Child and Family Services program and was also the Academic Award of Excellence recipient for that program at the Sioux Lookout Campus (highest GPA in the program among full-time students at the campus).”

Tanya Necan, a recent graduate from the Sioux Lookout campus, who graduated from the Native Child and Family Services program, won the award for Student Success Story for Sioux Lookout’s campus.

After cooking for a living, and despite facing struggles along the way, Necan decided to go back to school to start a career, shared the news release. “I was always a rebel,” Necan shared in the news release, adding, “Then I had my son, and I realized I can’t be displaying these behaviours if I don’t want him to follow the same path. So I needed to change my ways.”

Surprised by how much she had yet to learn, Necan added that the program taught her a lot about Indigenous history. She currently serves Sioux Lookout as a casual tenant support worker, helping people dealing with housing issues, and who may be on the verge of homelessness due to the housing shortage in the area.

Necan shared, “The program helped me a lot – I really liked it. I’m more aware of my own biases and I put myself into other people’s shoes.” She added, “I learned how to overcome things and see them through to the end. This program is like the first thing I’ve ever finished. It’s been a crazy ride.”

Confederation College President Kathleen Lynch shared, “While we wish we could honour our graduates’ success in person, with ongoing restrictions, replacing our in-person ceremony for both graduating classes with a Virtual Convocation was the next best thing.” She added, “Our graduates have overcome significant challenges to finish their program and earn their credential and we are incredibly proud of the courage and resolve they have demonstrated to arrive at this important day. We know their collective impact will be long-lasting and are honoured to have played a role in their journeys.” 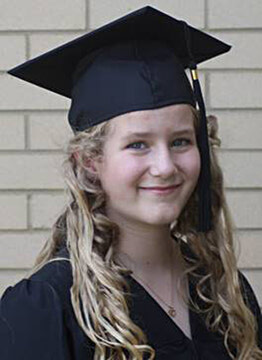 Hello families and fellow graduates. My name is Jessica MacMillan and Geneva (Otto) and I have been selected to be this year s valedictorians for the Class of 2021...