Sioux Lookout Multicultural Youth Music Program instructor Tommy Kuzemczak gave students in his music program an opportunity to keep up their skills over the summer by putting on a concert for Alcona residents and visitors from Sioux Lookout on August 16.
Performing were Stayed Tuned, Hot Mess, as well as Kaden Anderson and Kiera Schulz.
Music student Eric Goretzki pitched the idea for the concert, which was attended by approximately 60 people.
The music program will be starting up again shortly, if there are any students who would like to sign up for the program’s fall session, Kuzemczak can be reached through the music program’s Facebook page. 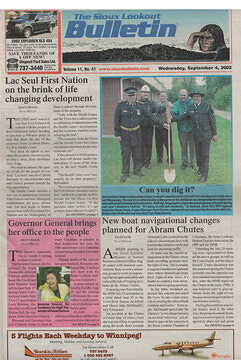 From The Archives: Wednesday, September 4, 2002