Citizen science - it’s for the birds

Area residents with a fondness for birds or the hobby of bird watching may have a new outlet to explore the lives of our feathered neighbours.  The return of the Ontario Breeding Bird Atlas (BBA) and the related North American Breeding Bird Survey (BBS) in 2021, both of which utilize citizen observations to increase our understanding of bird populations across the province and the country, provide an opportunity for bird lovers of all skill levels to contribute real world observations to a growing database of knowledge that can then be used in future conservation efforts.
The Breeding Bird Atlas had its start in 1981 and ran over a five-year cycle. A second atlas ran from 2001-2005. The third five-year survey runs from 2021-2025.
The premise is fairly simple. Imagine the entire province of Ontario divided into a grid of 10 kilometres by 10 kilometres squares. Volunteers adopt a square for a five-year period, and during that time try to record all the bird species they see in their square(s), taking special note of what birds appear to be doing using special abbreviated codes. So, for example, you see an American Robin carrying nest material? There’s a code for that. See a Red-Necked Grebe sitting on its floating nesting platform? There’s a code for that as well, and so on. Over the course of the five-year survey, these reports, pulled from all areas of the province that have had active atlas participants recording their observations, provide a snapshot of the current state of many bird species across the province.
This collected data can then be compared with information gathered through the last two Breeding Bird Atlas surveys, offering a long-term look at trends and population abundance data, allowing for better conservation efforts to be implemented where necessary.
Natasha Barlow is the Ontario Projects Biologist with Birds Canada. As she explains, “If somebody likes birds and can already identify birds, their breeding habitat, and breeding evidence, then their main point of contact is going to www.birdsontario.org. That website will lay out all the ways to get involved, different instruction and forms, the background of the atlas, how to register and how to really be a part of that community. Once people get to the website they can contact regional coordinators, or they can contact the assistant coordinator for the whole province and get further information there.”
As Barlow notes, recording data for the atlas does require some basic observational skills, stating, “It is geared a bit more towards the more skilled observer set, in terms of if you are able to go out birding and you are identifying different breeding evidence. So, you’d have different codes to record, like ‘Are they on territory? Are they collecting nest material? Are they feeding babies?’ and so on, collecting all that information so we can see where these birds are breeding.”
For those who may feel they are not ready for that level of observational skill, there are also more targeted surveys available to participate in. As Barlow explains, “Maybe you aren’t able to identify all the songbirds in the area, so instead you could help with one of our owl surveys. That way you just need to be able to know what a few species of owl sound like. That allows it to be more inclusive of differing skill sets.”
A priority over the next four years of the Atlas is getting more observations from sparsely populated areas of Ontario, and that includes the Northwest region.
“Especially for northwestern Ontario, that coverage is still very much a priority,” adds Barlow. “To see what’s breeding up there, even just doing the last year of the five-year survey could still give useful information. It’s not too late to help.”
If signing on to the five-year (four years left at this point) Breeding Bird Atlas seems like too much, Barlow suggests the Breeding Bird Survey (BBS) as a viable option as well.
The BBS requires a much lighter time commitment, as it relies on what are known as point counts in designated areas.
Barlow explained, “The time commitment really depends on what you want to do. If you are in charge of point counts for example, then the coverage includes 20 roadside point counts and five off road point counts within that five-year commitment. So doing that, for me, just took 20 minutes on two mornings. It’s not a big time commitment for point counts. You really have the flexibility of going out birding and when you are birding, just add that data to the survey through the NatureCounts app, which is the database for the survey.”
Barlow explained the point counts methodology as such, “One day a year, mostly near the end of May to June in Canada, we do point counts for predetermined survey locations.”
Again, this would require the ability to recognize many birds by ear, but as Barlow notes, there are options for individuals to use electronic recorders to do their point counts, which are then sent to more skilled birders who can listen and note what was singing or calling on the recording.
While bird breeding times may vary depending on species and location in the province, this year’s official Breeding Bird Atlas kick-off date is Saturday. April 23, as most atlassing is carried out through the main breeding season of late May to mid-August, with a focus on the month of June.
Individuals interested in helping out or who are looking for more information are encouraged to visit www.birdsontario.org. 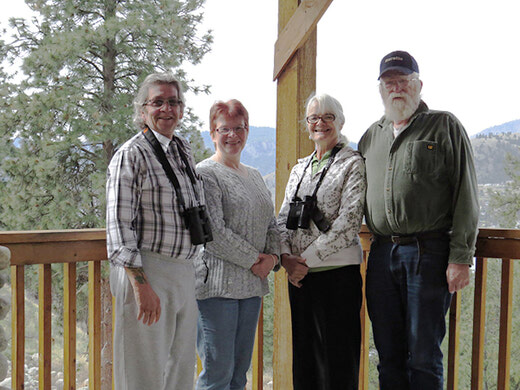 I drive a pickup truck. The side mirrors stick out a fair distance from the truck body. I take some pride, when approaching the pickup window of a drive-through, in sliding gracefully and smoothly with my mirror an inch or so from the building...