A local business owner has made a proposal to Sioux Lookout Municipal Council which would help clean up the community and generate funds to improve the town for everyone at the same time.

Broderick said, “When I purchased my pocket ashtrays (available at her store), the individual I purchased them from actually put me onto them… when he started talking about recycling your butts, I wanted to find out more about that.”

“TerraCycle is a recycling company based out of the US and also has a company in Canada,” Broderick informed. “They have quite a number of recycling streams that they run. The premise behind it is to get some of the litter off the streets, out of the garbage and into recycling where it’s actually being processed properly. Because they’re a recycling company themselves, they’re using these products.

“This particular stream is cigarette butts. They recycle the packaging, the foil, the butts, paper, any leftover tobacco gets composted. They use the whole thing. The filters contain plastics and they’re generally littered. For one, because they are really unsightly, and two, they have a value to them… if people would not put them on the ground, if they put them into a recycling program, those butts could be reused, then they would have value instead of just another piece of unsightly litter on the ground.”

Broderick has purchased three metal collection containers which she proposed be placed in the following locations, “At the top of the road by Northway Cemetery where the hospital staff and patients go to smoke. Another would be the Rec Centre where all kinds of people are in and out who smoke; the library bench where people hang out, they could put their butts in there.”

“For every three pounds of butts, $1 goes back to the community... So something like the Umfreville Trail, where there is no user fees; there’s no revenue coming from it. I thought rather than taxation supplying that (funds to make repairs to the trail), we need to start looking at different ways of doing things and this could be one of those ways. While it’s not going to create a ton of money, every bit counts,” she explained.

Broderick said she would donate the three metal butt collection containers she purchased to the Municipality, along with proposing locations for them. She further informed she would go around and empty those containers.

“I’ll be doing the emptying for the first little while and the goal is, if the program is successful and the Municipality finds it worthwhile to invest in, the Municipality then takes it over and they begin the collection,” she said.

Other locations she proposed adding additional metal butt collection containers include the Airport, the hostels, and local parks and beaches.

She added, “Ideally, businesses, if they wish to participate, would buy their own collection (unit) or provide their own collection, so as long as it has the ability to handle a burnable, than its fine. A metal pail full of sand works just as well as a fancy ashtray. Because butts are recyclable, there’s no need for them to be on the ground.”

Another idea she shared was, “If people are participating in the (annual spring) Pitch-In Program, perhaps they would consider carrying a second bag and rather than putting everything into one bag, put cigarette butts in one bag and garbage in the other.”

She informed that other communities who are running the butt collection program, such as Thunder Bay, are finding it quite successful.

Her proposal was well received by Municipal council with several council members commending her on the proposal.

Direction was given by Council to Municipal staff to speak further with Broderick and prepare a report for them on this matter.

“I liked that they felt positive about it and have turned it back to staff to look into,” Broderick concluded. “I think that this council seems to be dedicated to cleaning up and the CAO is really receptive to new ideas and getting things going for the betterment of the community.” 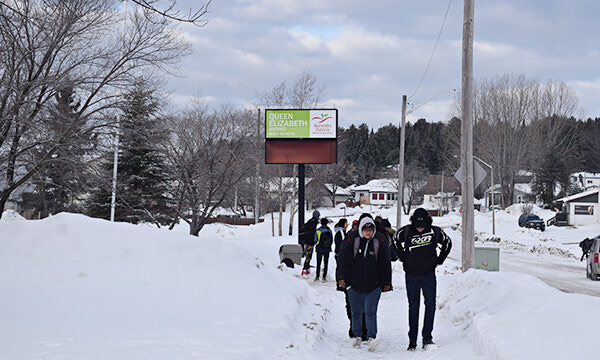