Santa Claus came to town last Sunday as the Sioux Lookout Chamber of Commerce, in partnership with The Municipality of Sioux Lookout, Sioux Lookout OPP and Sioux Lookout Fire Services, presented A Christmas Car Parade.
Taking place at the Sioux Lookout Fire Hall at 39 Fifth Avenue on Dec. 6 from 4 p.m. to 6 p.m., local residents were invited to drive-thru, pick up a loot bag, and say hi to Santa Claus, Sparky the Fire Dog, Smokey the Bear and Blueberry Festival mascot Blueberry Bert.
Residents were also invited to register and decorate their vehicles as part of a vehicle decorating contest.
Kayleigh Bates, Chamber of Commerce Executive Assistant, previously shared with The Bulletin about the event, which replaced the traditional Santa Claus Parade this year, “We didn’t want to cancel all the events just because people need something this year at Christmas. So we thought it would be good to still give the community something to look forward to and participate in.”
Sioux Lookout OPP collected unwrapped toys and non-perishable food items at the event to help local families this Christmas. 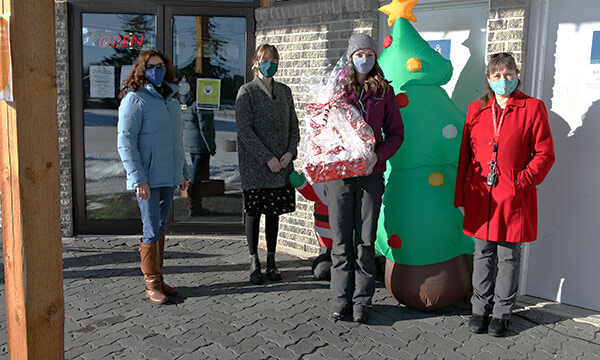 Local resident Jenny DeRusha was the lucky winner of this year s Moonlight Madness draw.
When making a purchase at any one of the participating 13 businesses during Moonlight Madness on Nov. 27, shoppers 18 years of age and older were entered into a...