The newest edition of the Sioux Lookout Chamber of Commerce’s flagship publication Northern Experience Magazine has just been released, and as readers may be quick to note, the format of the magazine is evolving.

Published every two to three years, Northern Experience has been a mainstay of the Chamber’s promotional materials since the 1980s and has in the past primarily been focused on touting our region’s tourism and outfitter industries.

But times change, and the magazine has grown to become something more.

As Christine Hoey, Chamber Manager and Treasurer for the Sioux Lookout Chamber of Commerce explains, “We (the Chamber of Commerce Board of Directors) met last fall to discuss producing a new copy. We noticed that we are getting requests for our magazine from a lot of the larger local organizations to use it as a recruitment tool. Because of that, probably one quarter were going to those organizations to take with them to career fairs. They came to us to produce something about the Municipality, as they had information about their own organizations but nothing about the town itself or the area.”

What the Chamber came up with was a ‘best of both worlds’ approach.

Hoey continued, “We discussed, as the Chamber Board, that we would kind of make the magazine into a tool that could be used for both. We could advertise the local businesses and outfitters for the tourists that want to come to Sioux Lookout for vacation, for fishing, hunting and sightseeing, all of those kinds of things, as much for people who are considering moving here to work. It’s the only magazine that represents the entire community.”

As Hoey describes, it wasn’t an easy task to expand the scope of the magazine while maintaining its traditional size, stating, “It was a struggle because we had to decide how we were going to make a 55 page to 60 page magazine, to encompass not only what we have to offer but also what the town is doing, and what’s going on, and then also what would  attract fishermen, hunters and tourists. We came up with this.”

The revised format that the Chamber decided upon is intended to reflect a more rounded view of the community, with information to appeal both to the tourist economy and to the families and businesses that might be thinking of moving here to put down roots.

Hoey went on to describe some of the format changes, stating, “This particular magazine we decided to do a seasonal thing, showing what is popular in spring, summer, fall, and winter. At the same time, we have small articles, with photos and advertising, that would be more particular to that season with a focus on the larger events that would be occurring. Things like the Blueberry Festival, Walleye Weekend, and Canada Day.  We also did a complete two page spread of the clubs and services that are offered in Sioux Lookout, from a recruitment standpoint. When people are thinking of moving here, there is a lot to be involved in if they so choose. Then for the tourists or vacationers, it also lists the churches and the charities and the things that might be important to them. We did some trail maps, the snowmobile trail, the fat bike and cross-country ski trails, to entice people that are thinking of moving here.”

With so much information to cover, it’s not surprising that it takes a lot of work putting it all together, with Hoey commenting that it took a full 12 months to shepherd the project from concept to print.

In the end, she feels it was worth the effort, saying, “We are pretty proud of it. The Chamber of Commerce Board of Directors spent a lot of hours going back and forth with it.  Our front cover, which we’re pretty proud of, is a painting by Don Ningewance, who allowed us to pick a painting of his to use. We have people who come to Sioux lookout every year, visiting from the (United States) and they come in for the magazine because they save copies of the covers.  We are very unique in that aspect, in that this magazine is promoting this area, but is also promoting the culture.”

One might think that with the magazine finalized and in hand, the people behind the scenes who brought the project to fruition could step back and relax, but that doesn’t seem likely just yet, as Hoey explains. “We printed 20,000, and probably 5,000 will be used for recruitment. We also just mailed 1,000 out to people looking for information on coming to Sioux Lookout. That was just requests for September and October, we haven’t even started with November and December yet.” 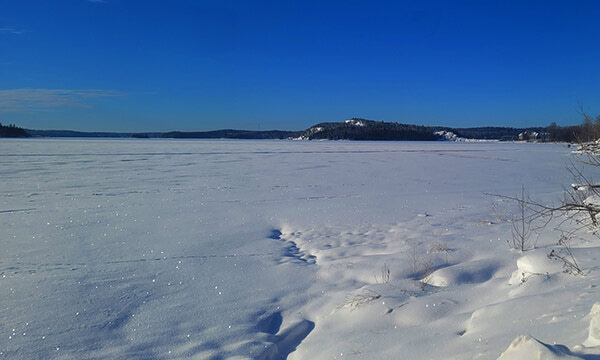 Trying to guess Pelican Lake freeze-up and ice out dates has been a tradition for Sioux Lookout residents for many years...