Nancy Dedon, 84, of Sioux Lookout, ON passed away on Wednesday October 21, 2020 at the Sioux Lookout Meno Ya Win Health Centre. She was born September 18, 1936 in Duluth, Minnesota, to Chester and Julia Carlstrom. Chester made private adoption arrangements for Nancy to be raised by Evall and Vendella Larson of Cambridge, Minnesota at the age of 18 months. She grew up in Cambridge, MN. She attended Macalester College in St. Paul, Minnesota with the intention of becoming a teacher. However, she did not complete her teaching certification.  On August 23, 1957 she married Roy Dedon and they spent 63 years together. Roy was drafted by the US Army and they spent two years in El Paso, Texas before returning to Cambridge, MN and began raising their family. In 1973, they moved to Sioux Lookout, ON and began caring for high school students from northern communities attending school in Sioux Lookout. They then became foster parents. Nancy cared for up to 10 kids, at a time, for many years. In 1985, Nancy took a position at the First Step Women’s Shelter in Sioux Lookout and retired in 2001. Following this, and until recently, she worked as part-time secretary for St. Andrew’s United Church in Sioux Lookout, ON. Nancy was an active member of the Sioux Hudson Entertainment Series and in 2006 was given a volunteer award in recognition of her 25 years with them.
Nancy enjoyed knitting. Her knitted “helmets” and brownies were highly sought after at the annual church bazaars. She also knitted many baby bonnets that Peggy Sanders gave out to all the newborns at the Zone Hospital. She was also an avid reader.
Nancy was predeceased by her parents Chester, Julia, Evall and Vendela as well as her brother David Nordell and adopted son Brian Dedon.
Nancy is survived by her husband, Roy; her children Brenda, Craig and Ann; and her grandchildren Naomi and Ava.
In respect for Covid-19 public health measures, a memorial service will be held at a future time to be determined later.
Memorial contributions may be made to St. Andrew’s United Church in Sioux Lookout, ON. 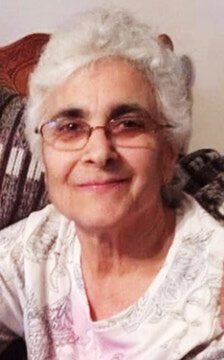 Giovanna Rosaria Zaffino passed away peacefully at the William George Extended Care on Wednesday, October 7, 2020.
Giovanna was born on October 5, 1934 in San Giovanni in Fiore, Italy. Giovanna is survived by her children; Giuseppe (Joe) Zaffino (Lynn),.