A major donation of sports equipment is bringing the hockey dreams of one First Nation community a little bit closer to reality. While Cat Lake First Nation has a hockey rink and players eager to work on their game, what they didn’t have was all of the hockey equipment needed to enjoy the sport.
As it turns out, Cliff Comber, Manager, Materials Eastern Canada at WestJet, had planned on donating a few bags of his own children’s used gear to a northern community in need. He soon found himself the recipient of nearly 700 pounds of hockey gear.
As Comber explained, “I’ve been coaching hockey and my kids have been in hockey for five or six years now. With their old equipment, I was trying to figure out what to do with it. I’m originally from Thunder Bay, Ontario, so I was hoping to find a way to bring it up to the Indigenous communities up there if I could. I thought I’d just fly up my two bags of equipment (to Thunder Bay), then I could get relatives to drive it north from there.”
Comber continued, “I had just reached out to the teams our kids play hockey with, and within three days we had about 25 bags of equipment. At that point my plan of flying it up on WestJet myself kind of went to the weeds... I couldn’t fly up 25 bags of equipment as personal luggage!
“I ended up reaching out to WestJet themselves to see if they could help get it to Thunder Bay, and I think a day or two later they came back with North Star Air being in on it. They were going to fly it right up to whatever reserve needed this equipment. That was more than I was expecting, and it was good to see it all come together quite quickly.”
As it turned out, North Star Air President and COO Jeff Stout also happened to be a board member of Mikinakoos Children’s Fund, the charitable arm of the Sioux Lookout First Nations Health Authority (SLFNHA), which works to address the quality-of-life imbalance in northern communities.
As Stout explained, the timing couldn’t have been better, stating, “So I kind of wear two hats in this whole initiative. I work for North Star Air, as President and Chief Operating Officer, but I’m also a board member at Mikinakoos, which was already working with the Kam River Fighting Walleye to put together a hockey school in a northern community. One of the communities that was showing a lot of interest (in the hockey camp) was Cat Lake. Unfortunately, it was delayed because of COVID, but it was still in the works.”
Stout continued, “At the same time, we at North Star Air have a working relationship with WestJet. When they had reached out about transporting some hockey equipment to the north, we had some questions about where it was going. It turned out they needed a home for it, so we connected WestJet with Mikinakoos in support of the hockey camp at Cat Lake. It was a great way to empower more participation by equipping the youth to participate in the hockey skills camp.”
Once all the donated gear was collected, WestJet flew everything to Thunder Bay, where North Star Air was able to take over, flying the gear into Cat Lake.
As Stoat notes, the delivery of hockey equipment intersected with the mandate of Mikinakoos, stating, “Our primary objective is to support First Nations youth in the SLFNHA communities, by engaging in sports related activities, as well as promoting healthy living through backpack programs and school equipment. There is no one means by which Mikinakoos makes that difference, but it supports community-based initiatives by facilitating whatever that need is. So, in this instance it was the athletic program needing equipment and needing that expertise from the Kam River Walleye to do a skills camp.”
James Morris is the founder and director of Mikinakoos Children’s Fund. As Morris notes, “Throughout Canada’s history, Indigenous athletes have been barred from participating in sports. Mikinakoos is working to right that wrong by partnering with organizations that share our common goal of ensuring youth can access the necessities they need to thrive in athletics.”
Asked if he sees similar donations of hockey gear in the future, Comber paused, before replying, “I’d love to continue doing this. I’m at a point right now where my kids are 9 and 12 years old, so they are at those ages where they are going through hockey equipment every year, and so are the teams that they are on. We do have this avenue to get the equipment up there. WestJet’s just been amazing with us. They have this Caring for the Community program where you can volunteer time, and WestJet gives out a gift of flight to that volunteer organization at no cost. That is just amazing, the giving attitude of WestJet. So, with this, I don’t see anything stopping us from getting more equipment.”
Comber finished by noting, “I’m from the area. All my summers were spent in Pikangikum. It was just tough to find the resources and the people that can reach out to all those reserves and figure out what’s needed, and where. Just to see these three companies getting together to move this equipment has just been amazing for me. I’m so proud of WestJet and the two companies we partnered with. It really is a feel-good story.” 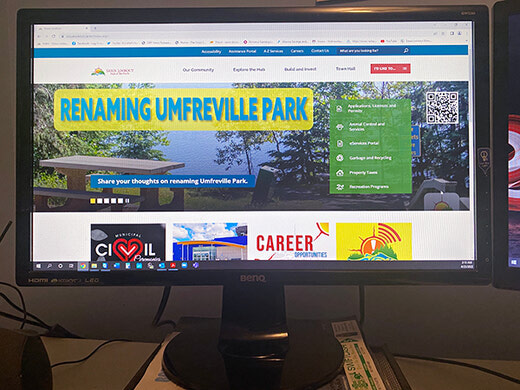 Those visiting the Municipality of Sioux Lookout's website may have noticed some changes recently.
The hope is that the new design will make the finding of information easier, and provide a more user-friendly experience...