More than 150 Canadian Rangers have volunteered to go on full-time active service to support their remote First Nation communities during the Covid-19 pandemic.
“Those Rangers are doing remarkable work in Northern Ontario right now,” said Major Charles Ohlke, a company commander with 3rd Canadian Ranger Patrol Group, which commands the Rangers in the Far North of Ontario. Rangers are part-time army reservists.
“The local patrol groups on active duty are primarily tasked with conducting liaison with the chief and council in their communities. They are the link from their First Nation to the Canadian Army.”
There are reports that the presence of Rangers in their traditional red uniform hoodies has a calming effect during a crisis that is causing considerable stress in the remote and isolated First Nations where the number of Covid-19 cases remains low.
“I think there’s always a sense of re-assurance when Rangers are seen in uniform in their communities,” Major Ohlke said. “They have a proven record of service to their people.”
The Rangers remain ready to conduct their traditional tasks, such as search and rescue missions and being ready to respond in spring flood and forest fire evacuations, and other emergencies. Rangers on the James Bay coast are currently monitoring ice and water conditions on the major rivers during the spring break-up season and are ready to assist in evacuations if required.
Like all members of the Canadian Armed Forces they are following federal health guidelines, such as social distancing and hand washing, to prevent the spread of the virus.
“There’s a number of things Rangers can do to help at the moment,” Major Ohlke said. “They are a highly professional and agile force that can assist in many low level tasks within their communities, such as assisting their community’s leadership to increase awareness of health protocols,  helping to distribute food and water to vulnerable and confined people, and conducting wellness checks.
“In Fort Severn, for example, water lines to about 30 residences froze. The Rangers are able to distribute water to them.”
The traditional spring hunt is underway and Rangers are helping to transport game from hunting camps to their communities and with its distribution and storage.
A number of Rangers are on standby to leave their communities as members of Ranger Go Teams that are prepared to go to the assistance of First Nations without a local Ranger patrol if they are needed during the current crisis.
“The Rangers are doing a great job during a very challenging time,” Major Ohlke said. “Their communities should be proud of them.”
Sergeant Peter Moon is the public affairs ranger for the 3rd Canadian Ranger Patrol Group at Canadian Forces Base Borden. 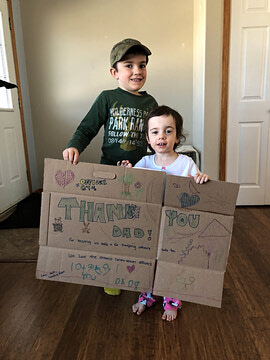 Sacred Heart School students and staff are showing their love and appreciation for essential workers, that are continually making sacrifices to support others during this time.