The Sioux Lookout Photography Club, which has been ongoing since the fall, has been attracting area residents who are looking to learn photography or take their existing skills to the next level.
Freelance photographer Devon Opden Dries moved to Sioux Lookout in August, and he kick-started the idea of a photography club through a Facebook post in the Sioux Lookout & Area Events & Services public group.
“When I first moved here, I started looking around to see if there was a photography club in town, and I didn’t find any information. I had just come from Fredericton and I was a part of a big photo club there, so I wanted to see if there was something similar to that in Sioux Lookout. I checked on the (Sioux Lookout & Area) Events & Services Facebook page and asked if anyone knew of any clubs. There was no response so I asked what if we create one? A bunch of people said that would be great, so I made a Facebook page for people to join. From there, we tried seeing what options we have, and that’s when someone suggested the Library… It worked out great,” said Opden Dries.
“I was new to town and just wanted some friends that were into photography again because I knew that I would miss that as soon as I moved… I thought it would be fun to have more people interested in photography and encourage each other to explore that avenue of creativity,” he said.
“It fit hand-in-hand with our plans to extend our programming to adults and to support adult artists, so I was really pleased… So far we’ve seen about 15 people show interest in coming, and even more on the Facebook page who perhaps can’t make it out,” said Sarah Fraser, Digital Creator North Program Lead.
Hosted in the Sioux Lookout Public Library Digital Creator space, Fraser said the Sioux Lookout Photography Club generally runs two Thursdays a month from 5 to 7 p.m. The club is for anyone ages 18 and up.
So far the club has run a variety of workshops including photo show and tell, camera settings and functions, intro to Adobe Photoshop, understanding lighting and depth of field, Christmas card making with photos, and practice time with portraits and still life.
Opden Dries said he’s planning a fun future event, but the date and location is still to be determined.
“I’m planning an event coming up, but I still need to secure a location. One of the workshops we did was on portraits, and it was an introduction to how to photograph a person, how to work with a model, different ways to pose, and a little bit about lighting… The idea is I want to do a little photo challenge with all the members where they’re paired with a random model, they don’t know until the day, and put in a random location, and they’re given 30 minutes. They can’t delete any pictures, and they’re only allowed to take 30… Full credit for the idea came from the photo club I was at before. They did the same thing, and it was super fun. It will be coming up in the near future hopefully,” he said.
Fraser said the Digital Creator space has three DSLR cameras that are available for members that don’t have a camera.
The clubs’ events can be seen on the monthly Digital Creator schedule or in their Facebook group titled Sioux Lookout Photography Group.
“Any events that are going to take place, the postings will be in our Facebook group. Usually the day of an event, or the day before, there’s also a reminder we send out. It’s also a place for people to share their work or ask questions,” concluded Opden Dries. 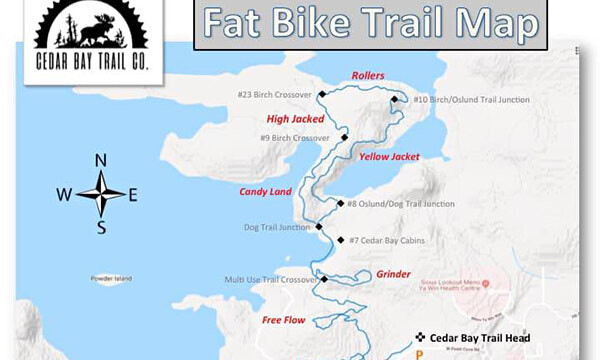 Over the past three years, the Cedar Bay Trail Co has been maintaining, grooming, and building trails located at Cedar Bay.