A video of the arrest of a 16-year-old Indigenous girl in Sioux Lookout on the evening of April 23, near the corner of Fifth Avenue and King Street, has gone viral and has many people in the video’s comments section on social media questioning the manner in which the arrest was conducted.

“When we first encountered the young person she was sitting on the bench crying and in distress and the (OPP) officer standing over her with his hands on her. My mom stopped and rolled down the window and he asked, “Can I help you?” And my mom said, “Just wondering if he’s okay? He looks in distress (she and her mother initially thought the girl was a boy). He said this doesn’t concern us and he asked us to drive off.”

Footman added, “She was yelling to us when we rolled down the window and my mom asked if she was okay. She yelled, “No! Help me!”

She continued, “So my mom started driving off, but as I turned my head, I could see that he (the officer) was being rough with that individual.”

She told her mother to drive around as she felt she needed to record what was happening.

“As soon as I saw him throw her to the ground, that’s where I yell, “We’re recording you!”’

“I never witnessed in person that type of force against a teenage person, of a grown man. We were all shocked. My hand’s shaking in the video when I’m taking it,” she said.

Footman questions why the OPP officer who conducted the arrest didn’t wait until the Crisis Response Nurse could come and speak with the girl.

She said she felt threatened by the officer, “Yeah, definitely. They rushed our vehicle.”

She added, “We didn’t want to end up on the ground in cuffs as well.”

The officer who approached her states in the video, “She was just spitting and kicking at me.”

He goes on to state, “Her mom is the one that called her in today.”

The officer also informed, “Our mental health nurse is here right now to assist as well.”

Footman was also surprised by the number of officers who attended the scene of the arrest.

She said she later had an opportunity to meet the girl. “She has two black eyes and a giant gash across her face.”

“Her mom thanked us for taking that video because the officers didn’t tell her how they treated her,” Footman said.

Asked further about her video she shared, “There’s even comments that, oh, she edited the video, how is it she just caught this part, there’s more to the story than this, but I think regardless if he was spit on or kicked, I don’t think that warrants that type of excessive force.”

A news release issued by Sioux Lookout OPP stated, “This individual was known to police and was located highly intoxicated on Fifth Avenue. The officer attempted to effect an arrest and was physically assaulted by the individual.”

The news release goes on to state, “As a result, a 16-year-old young person of Sioux Lookout, who cannot be identified as per the Youth Criminal Justice Act (YCJA), was charged with the following offences:

Assault with intent to resist arrest contrary to section 270(1)(b) Criminal Code (CC);

Assault contrary to section 266 CC; and with

Fail to Comply with Sentence Order contrary to section 137 YCJA.”

In the video, the officer stated the girl was on conditions not to drink.

OPP spokesperson Sergeant Mike Golding commented, “The OPP are aware of this video and we are, at the detachment level right now, reviewing and assessing whether it should be stepped up to what we call Professional Standards Branch, which is basically the branch within the OPP that handles all internal matters, hands out discipline, any sorts of issues that arise, they’re the ones that actually look into it… Regionally the OPP is looking at it, but it hasn’t been determined whether it’s going to be going to the Professional Standards Branch or not.”

Commenting on the number of officers who assisted in the arrest he explained the officer who was conducting the arrest called for backup and several officers responded due to the OPP detachment being only a block away. “You wouldn’t normally in Northwestern Ontario ever see seven officers show up,” he said.

He confirmed members of the public absolutely have the right to video or photograph officers in these types of situations.

That being said, he added, “That’s the hard thing when people are posting excerpts of videos, clearly in that case there was something that transpired prior to the beginning of that video, but I like to call it the court of social media, doesn’t entertain that. People just base it on what they see.”

He stated, “We take any allegations against any of our officers seriously and we will figure out if there was an injustice done. It will be looked at thoroughly.”

Sioux Lookout Mayor Doug Lawrance commented, “The video is a snapshot. It doesn’t capture all the events leading up to the part that is captured on the video.”

He continued, “In general, my reaction is I’m saddened for the young girl who is not yet an adult and is in such a highly intoxicated state that she’s put herself at risk and perhaps others at risk to such an extent that her family felt they had no other recourse but to call the police. It’s just a very sad situation. I’m saddened for the police officers who have to deal with it and deal with it on a daily basis in Sioux Lookout.”

Lawrance added, “I think our police in Sioux Lookout do a remarkable job of dealing with this on a higher frequency than any other officers in the country. The busiest officers on a calls for service basis, per year, per officer, are in Sioux Lookout and 95 per cent of the calls for service I am told by the police inspector are related to alcohol and addictions issues.”

He added, “We’re doing so many positive things in Sioux Lookout and the police are at the forefront of that.”

“We need help in Sioux Lookout from the province who could help us with things like a youth safe house, with more counselling, a youth treatment facility, adult addictions treatment, a detox centre, a fully resourced emergency shelter. These are huge gaps in Sioux Lookout,” Lawrance said, adding, “The focus is in the wrong direction. The focus needs to be on the young girl and so many like her who need so much help.”

Kiiwetinoong MPP Sol Mamakwa said he too had seen the video.

“Certainly I feel concerned because of the use of force that you see on this very young person,” he said.

Mamakwa said he has spoken with the Sioux Lookout OPP detachment commander.

“I know he’s doing his due diligence as well to examine and look at what happened with this whole incident.”

“We had a discussion as well on how do we move forward?”

Candace Kitchkeesick, a Sioux Lookout resident, is coordinating a workshop for youth and adults this evening (May 1) from 3:30 p.m. to 5 p.m. at the Sioux Lookout Public Library to help educate people about their rights when interacting with police.

“We will then be holding a peaceful rally and drum circle in support and solidarity outside the library where the incident took place,” she said.

The event will include a safe space for open discussion. 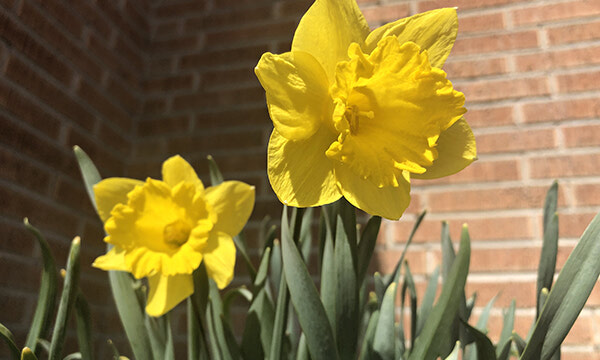 Snow is disappearing, playgrounds are bustling with children, area waterways are opening up and flowers, such these daffodils, are beginning to bloom around town; sure signs of spring in Sioux Lookout.