April 1 marks the beginning of fire season in northwestern Ontario, and Sioux Lookout Fire Chief Rob Favot is reminding the public of the laws, rules, and hazards that come along with it.

“April 1 to October 31 is the fire season, under the Forest Fire Prevention Act. During that time, if you live in Sioux Lookout, Hudson, or Alcona you’re required to purchase a fire permit. The cost is $10 and it’s good for a complete year from April 1 to March 31 of next year… If you’re burning and you don’t have a permit, it can cost you a $105 fine. If you start a fire and you don’t supervise it, it could cost you $155,” he explained.

“As of April 1, there’s no daytime burning. Daytime burning is two hours before sunset and has to be out two hours after sunrise. That is for open-air fires or incinerator fires, so you’ll require a permit for either, or, or both. The permit holder has to be present at the site at all times when they’re burning. The permit holder must have some kind of suppression available at all times, whether it’s a shovel, rake, or water. The permit holder has to make sure that the fire is completely out when they’re finished… You’re responsible for all fires that you start so if there are any costs, or anything that gets away from them that causes the fire department to respond to the call, you’ll be billed for it,” he continued.

The fire season runs for seven months, but that doesn’t mean you’ll be able to burn all the time.

“No burning if the winds are blowing at ten kilometres or higher. Your piles of trees, brush, or branches can’t be more than two metres in height, so approximately six feet high, and two metres wide. Also you have to remember, when you’re burning, you have to be a certain distance from any kind of combustible material like your fences and houses. Also, be cautious of the hydro lines above you and when you’re burning you’re responsible for damages to anyone else’s property. You also have to remember that in your brush piles or incinerator you can only burn by-products of wood,” Favot shared.

“If you start a fire and the flames are blowing and the smoke is blowing to your neighbour’s property, that’s probably a pretty good indication that the winds are over ten kilometres. Sometimes the radio stations have the wind speed or the weather apps on your phone usually tell you the wind speeds as well… You always have to remember that you have neighbours in the area, and you don’t want to smoke them out if they have their windows open or they have their clothes on a line, so you have to be really cautious,” he added.

The Sioux Lookout Fire Department pre-burns certain areas to be proactive and mitigate any fires that could start. One of the ways the fire department and local Ministry of Natural Resources stays proactive is by putting on local fire restrictions during times where they feel it’s necessary and unsafe for fires. In the case of a fire restriction, either by the Municipality or by the Ministry of Natural Resources, there are to be zero open fires. Restrictions can be caused by lots of heat, no precipitation for a length of time, and the area being dried up.

Another aspect Favot touched on is personal fire pits, which tend to be popular during the summer months.

“If you have a pit in your backyard, you can use it during the daytime if you’re using it for cooking or warmth. Most people wait until the evenings to sit around a little pit. With a pit it’s the same as burning a pile of brush or using an incinerator. You still have to supervise it, you still have to make sure the fire gets put out, and you don’t want it close to your deck or fence… But if you’re just having a fire pit and using it for cooking, warmth or entertainment, you don’t need a permit for that. If you’re using it to burn a pile of brush, then you need a permit,” he concluded.

For more information, drop by your local fire hall or go to www.ontario.ca/page/ outdoor-fire-rules-and-permit. 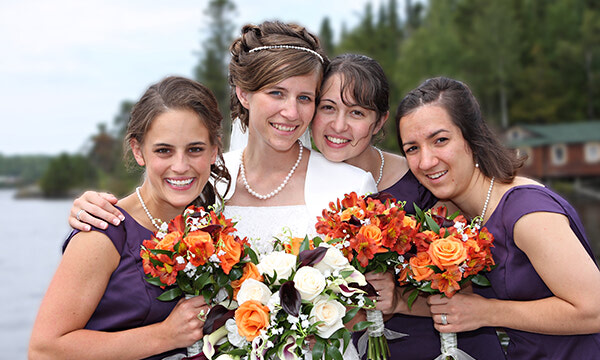 Planning your dream wedding this spring or summer? Local businesses have you covered!

As temperatures warm up this spring, maybe love is in the air for you and that special someone?