Along the shores of Lac Seul are nine Memorial Cairns, which are dedicated to members of Legion Branch #139 in Hudson who fought and died in World War II.

Hudson Legion member and caretaker of these cairns for over 12 years, Mike Starratt shared, “Each spring, I do an annual snowmobile ride to check on the condition of the cairns, flags and flag poles. Family and friends join me as we pay our respects on this annual snowmobile trip. The round trip to visit all the monuments is about 200kms.”

Starratt shared that these monuments hold a special place in his heart as his grandfather and great-uncle served in WWII. “There are nine cairns located along the shores of Lac Seul that represent the nine Hudson locals that died in the Second World War. The cairn project was started in 1986 and were all completed by 1990.”

Starratt shared that these cairns were updated with solar lights last year. “Two of them have time capsules that is scheduled to be opened in 2039 (100 years after the start of WWII),” he added.

More information on the nine men the Memorial Carin’s honour can be found at: https://lacseulfloatinglodges.com/lac-seul-memorial-cairns.php 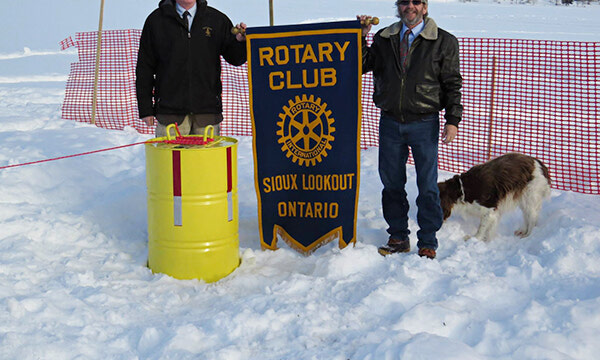 Rotary barrel out on Pelican Lake for this year’s predictions

The Rotary Club of Sioux Lookout has kicked-off its eighth End of Winter Contest, encouraging people to make their predictions for the date and time the Rotary barrel will sink through the ice on Pelican Lake. The winning prediction is based on the time..