Beaver Buggies, Kub Kars and Scout Semis of varied colours, shapes, and designs raced for the finish line over the course of the day, with racers eventually being eliminated as they accrued points.

Approximately 35 racers took part in the event, which according to 1st Sioux Lookout Scout Group Commissioner Lindsay Young, was a great success.

“It seemed like everyone had a great time. The kids had good spirits and good sportsmanship. They were helping each other. I really loved to see the leadership from the Cubs and the Scouts running the track,” she commented.

In the Cub group, first place went to Daniel Nadeau. Christopher McCord was second and Flint Rattai was third.

In the Scout group, Jaiden McKay was first, Carson Pettit was second and Alyssa Coulombe was third.

“Every child left here with a prize, whether it was a certificate, a medal, a trophy or a prize,” Young said.

“These events can’t run without volunteers; our leaders, the parents who help out, and the generous community that we live in,” she added.

Bumper to Bumper Sioux-Per Auto Parts was the title sponsor for race day.

Slate Falls Airways was the silver sponsor for the event.

“My hope is that they learn sportsmanship. Through building their racers, designing them, and then racing them, they’re learning about having grit and sticking it out until the end, working hard at something and having pride,” Young concluded. 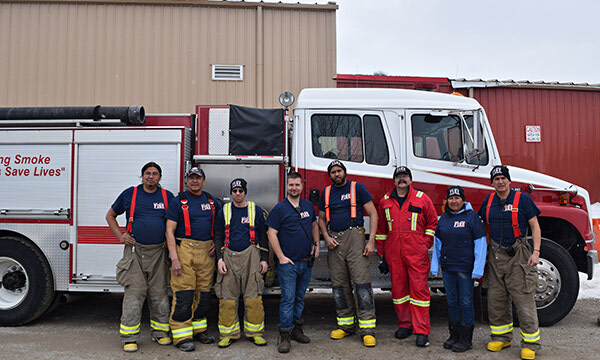 Firefighters from St. Catharines, Ontario donated and delivered a new fire truck to Lac Seul First Nation to service the three communities as part of their new Fire and Emergency Services Department.