More than 20 dogs and their families, as well as at least one cat and its family, took part in the Sioux Looks Out For Paws Rescue Walk on August 3.
This was the 15th year the rescue walk fundraiser has been held in Sioux Lookout.
“We do it for a number of reasons. It is a fundraiser, it also gets dogs out walking, people, and it’s just good all ways around,” commented Lynda Ducharme, chairperson of the animal rescue.
The rescue walk raised approximately $4000. “The money will go to all of the vet costs, most likely,” Ducharme explained.
Sioux Looks Out for Paws held a BBQ the previous day at Slate Falls Airways, while the business was running its annual float plane rides Blueberry Festival event.
The BBQ raised approximately $900.
Ducharme said volunteers were very pleased at the turnout for both events.
Ducharme thanked the community for their ongoing support during the COVID-19 pandemic.
Community donations have kept the animal rescue well stocked with food, which is why the money from the two Blueberry Festival fundraising events will be used to pay for veterinary expenses.
Another thing the animal rescue is in need of is cat litter. The organization could always use more volunteers.
People can contact the animal rescue by visiting their Facebook page, Sioux Lookout Rescue.
People can also now make EMT donations to support the animal rescue. People can contact the animal rescue for details.
“It’s a wonderful town. We all feel that way. They’re very, very supportive of us,” Ducharme concluded. 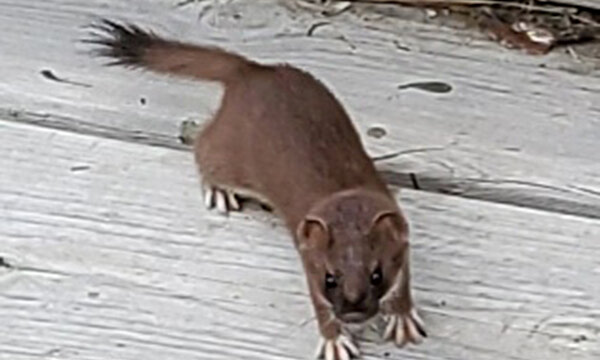 Dick's Hideaway: A devil under the front door step

Quiet camp mornings sing their own special songs. I m usually up early and sit silently on the deck with coffee and my thoughts, looking out over the lake and scanning the forest clearing where the cabin nestles.