Last Friday evening, the Sioux Lookout Shrine Club (a member club of Khartum Shrine) honoured the contributions of club and community members who helped make the Khartum Shriners Ritualistic Unit Fundraising raffle a success.
Earlier this spring, Sioux Lookout’s Doug Lee was the winner of the raffle, which included: a three night, two day American Plan Package #1, for two people with Anderson’s Lodge in Sioux Lookout, two tickets to a Winnipeg Blue Bombers CFL football game, two nights hotel stay, and two return flights between Winnipeg and Sioux Lookout.
“This was the very first Khartum Shrine Ritualistic Unit fundraiser to support the Khartum Shriners Children’s Transportation Fund,” shared Sioux Lookout Shrine Club member Klaus Knorz.
At Anderson’s Lodge, on June 14, Khartum Shriners Potentate Doug McKechnie presented thank you plaques to Tara Drew of Drew Osteopathy, Sioux Lookout Shrine Club member Larry Ross and Anderson’s Lodge (accepted by co-owner Jody Morin) for contributing prizes for the raffle.
“I’m told the Ritualistic Unit will present a cheque for $5000 for the transportation fund at the Potentate’s Ball later this year,” McKechnie shared, adding, “This is a wonderful thing for our Shrine patients, and as Potentate of Khartum Shrine, I would like to formally acknowledge support from several people that made this donation possible.”
“It was the donation from Anderson’s Lodge of a fishing package that was the reason our raffle was so successful,” Knorz stated.
“Jody and Jackie (Duhamel, Anderson’s Lodge co-owners), we could not have pulled off this raffle without your generous support. On behalf of Khartum Shrine, and all of the Shrine kids, thank you so much for your wonderful donation,” McKechnie stated. 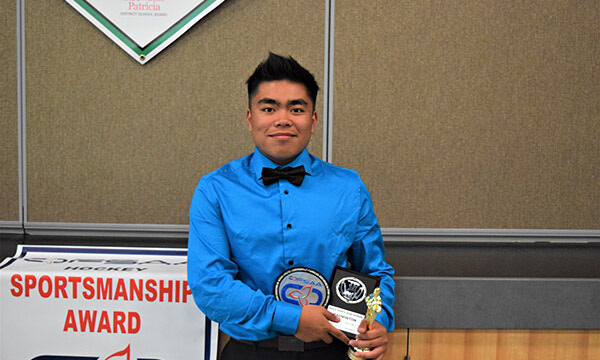