An early end to this year’s curling season, hope for another successful golf season

The Sioux Lookout Golf and Curling Club (SLGCC) concluded its curling season early on March 12, due to the Sioux Lookout area entering Red Zone COVID restrictions, alongside warmer temperatures. “Definitely, the weather and COVID played a huge role in shutting the plant down,” said SLGCC’s Board of Directors’ Secretary JoAnne Van Horne.

Horne said, “It’s been a struggle this year because we didn’t know how COVID was going to roll out and affect our community and we, the Board of Directors took a chance. We wanted to offer something to our community and our community did support us.” While the club was prepared to extend the season until April, “It got so warm, so early. I think we would probably have called it early anyway, with the way weather has warmed up. It just costs so much to keep the plant going,” she added.

Horne shared that the club really took a hit when the pandemic emerged, requiring the club to end their curling season two weeks early last March. “We were very unsure whether we would even open up our club and put the ice in, because it does finically cost a lot of money to keep it going. But we forged ahead in the fall and we said no, we’re going to do it. This is one sport that we can offer safely and we had an amazing turnout of teams that came back this year. We were down maybe a couple of teams. But, I think people supported us and people were looking for something to do and we wanted to provide that to our members.”

Horne said that this winter’s curling season started in the third week of November, which was about two weeks later than usual. The club was open for curling until Christmas when the stay-at-home order came into effect, thus, shutting down for six weeks. She added that curling was reopened mid-February, which ran until March 12. The club made sure proper protocols were in place and their members aware.

Horne said, “We are gearing up for the upcoming golf season. We do run a process of hiring staff and if this weather keeps up, who knows, we may start our golf season earlier this year than last year. Normally it’s the beginning of May that we start to golf, but who knows, we always go with the weather.” She said that with set protocols in place, golf is a sport that can be enjoyed safely during COVID. “We are good to go as soon as our course is ready and we do not get another stay-at-home order,” Horne added.

Horne shared that the club constantly keeps reassessing the current COVID situation to base any further decisions. She said, “We hope that we are going to have another successful golf season. In fact we gained golfers last year. We had people come out to golf who had never golfed before or had bought a membership, because there was no other sports going on in town.” Horne added, “We’re hoping this year’s golf season proves as successful, if not more, and if we can get up and running for the next curling season, that’s always our hope.”

People can find out more about this year’s golf season, as information becomes available, on the club’s Facebook page, @SiouxLookoutGolfandCurlingClub. 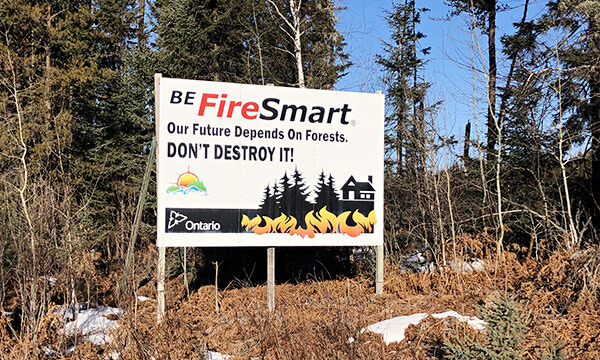 Spring can be a volatile time for wildland fires in general , shared Sioux Lookout District Sector Response Officer for the Ministry of Natural Resources and Forestry (MNRF), Carney McConnachie. Before the trees green up and the leaves emerge, fire...