Amanda Rheaume shares soulful, powerful music, connection to the area as she kicks off second half of Sioux Hudson Entertainment Series season

It was a small but enthusiastic and appreciate audience who attended the Sioux North High School Cafetorium on Jan. 3 for the Sioux Hudson Entertainment Series, and that enthusiasm and appreciation was definitely felt by the evening’s feature performer, Amanda Rheaume.
“It was wonderful. I loved it. Honestly it was dark and I couldn’t tell how many people were there but it felt full. I could really tell that people were listening,” Rheaume shared after her performance. This area holds special significance to Rheaume, who can trace her ancestry to Lac Seul First Nation.
“I’ve been looking forward to this for a long time,” she said of her visit to Sioux Lookout, located upon the traditional territory of Obishikokanng (Lac Seul) First Nation.
Rheaume said although she has been to northwestern Ontario before, this was her first time in Sioux Lookout. “I actually love that it’s wintertime because it feels just so different and I get to experience the territory and the land… I love the way everything feels up here. It’s sort of like coming home even though I’ve hardly ever been here,” she said.
Rheaume’s great-grandmother Stella Bannatyne had lived in Lac Seul First Nation, moving away when she was quite young.
One of Rheaume songs, which she performed on Jan. 3, was 2013’s “Keep a Fire”, which was nominated for a JUNO Award and won a Canadian Folk Music award for Indigenous Songwriter of the Year. The song was in memory of her grandmother Stella.
“There’s some folks that actually knew some members of my family that I learned after. I just think there’s a very special connection to this place,” she said.
Rheaume’s website describes Rheaume’s music as, “Rootsy, guitar-driven ballads introduce crucial dimensions to the world of Heartland Rock. In a genre characterized by anthems of underdogs, assumptions and unfair advantages, Rheaume’s sound and story crucially and radically expand the geographic and cultural boundaries to make space for new perspectives on resistance and resilience. A Citizen of the Metis Nation, and an active and proud member of the 2SLGBTQ+ community, Rheaume’s music is indeed from the heart and the land.” Rheaume had released five full-length albums over a 15 year period.
Rheaume performed with Kyler Tapscott – guitar, Tyson Galloway – bass, and Alyssa Delbaere-Sawchuk – fiddle. Audience members were heard remarking after the show how well everyone harmonized together. The performance earned a standing ovation and encore.
“This is the first time we’ve played actually in this formation,” Rheaume said. “Oftentimes we’ll have a drummer, or I’ll play with just Kyler, or just Alyssa, or Kyler and Tyson and I will play. Because we were coming up here I wanted to bring as full of a show as possible but I didn’t want to drive with a trailer, because I wasn’t sure about the roads, so we just decided to do this. We’ve all been playing together for some time. Alyssa I actually met and started playing together with only in 2021… so it hasn’t been that long, Kyler has definitely been a couple of years, same with Tyson, but it feels like we’ve been playing together forever.”
“I would love to come back here,” Rheaume concluded.
Entertainment Series Committee Chairperson Alyson Martin said of the performance, “It was a great way to start the new year and start our lineup for 2023. Amanda, obviously is someone who is familiar with our area, has ancestors that are from here, and there’s a beauty and a vulnerability when any artist stands up on stage and tells their story and the stories of those in their lives and she just did it with such power and grace, with amazing artists performing with her. So, for those of us that were here this evening it was time well spent and we were thrilled to have her in this neck of the woods and she is equally excited to be here as well.”
Martin added, “The musicianship across the board was stunning. You get those voices, you get the harmonies… it was a beautiful evening and we really appreciate everyone coming out.”
The next performance the Sioux Hudson Entertainment Series will present will be multi-award-winning artists Canadian Suzie Vinnick and Australian Lloyd Spiegel on Feb. 9.
“Suzie has been here before and people loved her when she was here. If you missed her the first time, it’s wonderful if you can make it out. Lloyd Spiegel is actually from Australia, so it will be a roots and blues evening. They’re both phenomenal musicians and they are going to bring it on that performance… it’s going to be an evening of wonderful music, stories, good laughter and another night as community members just spending time together and welcoming musicians into our lives.” 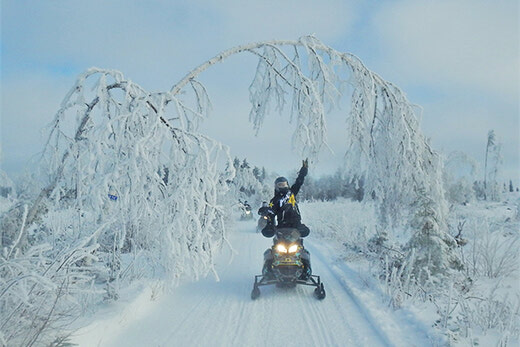 Ice and snow have transformed the Sioux Lookout area into a winter wonderland.
Local resident Mike Starratt, an avid snowmobiler, captured this image on Jan. 7 west of Hudson towards Dryden on the NWOSTA A trail...