Almost time to get your boat winter ready

With the dropping temperatures in the region, it’s that time of year again to start thinking about putting your boat away for the winter. Ensuring a few safety checks before putting the boat away for the season can help you save time and money, from potentially costly spring repairs. The General Manager at Mascotto’s Marine Ltd., John Madsen informed, “Boat and engine winterization should be a high priority at this time of year for all recreational and commercial boaters.”
Madsen added that if your boat is left outdoors, it’s important to install some form of shelter or shrink wrap for protection. “Our technicians have been shrink wrapping several boats over the last few days.  We build a wooden frame and apply shrink wrap material over the top.  It’s creates a steep slope for snow and rain to shed off, while allowing ventilation so that air can still flow into the interior,” said Madsen. This process will also protect the windshield and other components from the weight of the snow.
The Manager at Dingwall Motors, Derrick Sawdo said, “You want to make sure you don’t have any water left over in your motor, or inside your boat, as well as in live wells. Add antifreeze into your live wells. This is also a good time to change your oils - gear oil as well as engine oil.” Madsen added that “engine fogging” should be done internally lubricate and protect two-stroke engines and four-stroke engines should have an engine oil and filter change.  “Inboard/outboard stern drive engines often require the cooling system drained and antifreeze added,” and a failure to do so may result in engine damage, explained Madsen. The lower unit/gear-case should also be drained and refilled with clean oil to remove any water contamination.
“If you have a problem with your gear oil because of moisture, since it’s always in the water, that could freeze and cause a crack in which case it’s a very expensive fix. It could go from anywhere between $1500, to $7000. If you did your regular maintenance, you’re going to prevent that from being an issue, come springtime,” said Sawdo.
Madsen suggested that when it comes to the fuel, keeping a full tank could help avoid any build-up of condensation over the winter months. Fuel stabilizer should be added to the fuel system, and the engine should be run to circulate the stabilizer through the fuel system, fuel rail, and injectors. He added that it is also a good idea to check the steering system and service grease locations.
When it comes to maintaining the interior of your boat, you should remove any valuables, including electronics, screens, floatation devices, or anything else, said Madsen. You may take time during the winter to clean, check and replace these items, if necessary. He added that the boat interior should be cleaned and dried before storage and compartments opened to vent.
Madsen also recommends keeping batteries fully charged and disconnected at the negative terminal. Inspect trailers for loose fasteners, bunk and roller condition, winch operation, tire condition, and wheel bearings. The prop-shaft and seals should be inspected for condition, fishing line or weeds removed.
Madsen concluded, “If these procedures are followed, you are far more likely to start off next year’s boating season on time and trouble-free.  As we venture far from home to remote areas of our surrounding lakes and waterways, equipment preparation and maintenance becomes paramount for reliability and safety.  If you take care of your equipment, it will take care of you!” 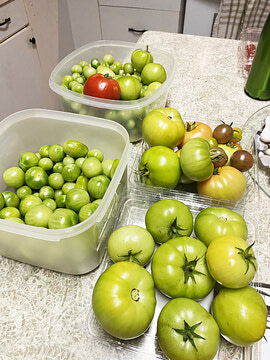 Time to get your garden ready for winter

With cooler temperatures upon us, gardening enthusiasts should be bringing in their harvest, if they have not already, and think about getting things ready for winter.